Before my sociology class today, I sat down in a classroom building with my laptop and tried to finish some homework for another class. Out of nowhere, from the corner of my eye, I see this student approaching me. I looked up from what I was doing and smiled.

Um, do I even know you? I looked at his face. I’m pretty sure I’ve never seen this kid before in my life.

Then he grabs ahold of his jacket’s zipper and quickly unzips it revealing a shirt underneath identical to the one I had on.

Then he rolled his eyes at me and walked into his classroom.

I was speechless for a little while. Hahaha ALL HE HAD TO DO WAS LEAVE HIS JACKET ON and no on would have EVER known. Or he could have never said anything! I’m not even in his class. He actually went out of his way to draw attention to it. And was it really that big of a deal…? What is this? Prom?

Who cares if we have the same shirt on.
It was such an awkward way of handling the situation. I felt really weird afterwards.

Aside from that, I had something a little unfortunate happen to me at the dining hall before class. I was waiting in line to make a Belgian waffle as I watched the girl in front of me struggle to remove her waffle from the waffle maker. She pulled at her waffle with the tongs but she was only lifting out bite-sized pieces. Her waffle was sticking… but I know she sprayed the waffle maker because I reminded her to spray it right when I saw she almost forgot.

Then it was time to make mine.

Just like always, I sprayed the whole thing (top and bottom), poured in my waffle batter, closed the device, and started the 2-minute countdown. Except, this time, something was different. The same thing that happened to the girl had happened to me. As I reached in to grab my waffle, I could only pull out little bits and pieces. My waffle was a train wreck.

One of the dining hall workers came running over and she was like, “AWWW HONEY LET ME MAKE YOU ANOTHER ONE. YES?”

I wasn’t going to keep you waiting… in fact, I was just about to kindly decline her offer. This guy was so rude and impatient and impulsive that in retrospect, I kind of wish I did say yes to re-make my waffle. I don’t know if he thought I was actually going to say yes or what but I didn’t appreciate the way he handled it. I was more upset with how he responded than I was with my sad waffle-of-sorts.

I ended up eating a melon and piece of chicken instead. Yummmmm. 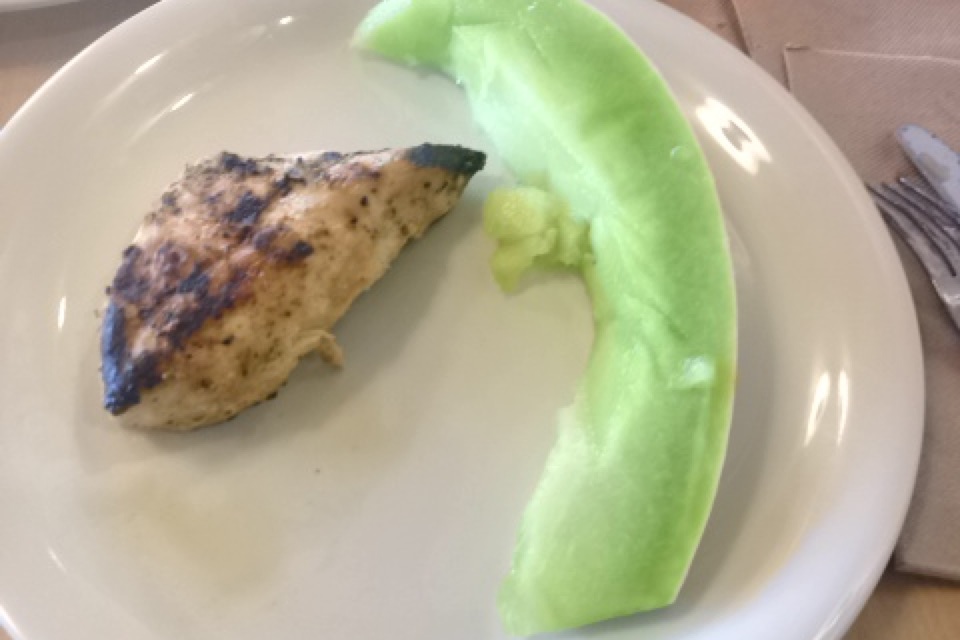