La Tomatina is the largest food fight festival in the world. Over 20,000 people pile into the tiny city of Buñol, Valencia to throw 30,000 pounds of rotten tomatoes at one another. 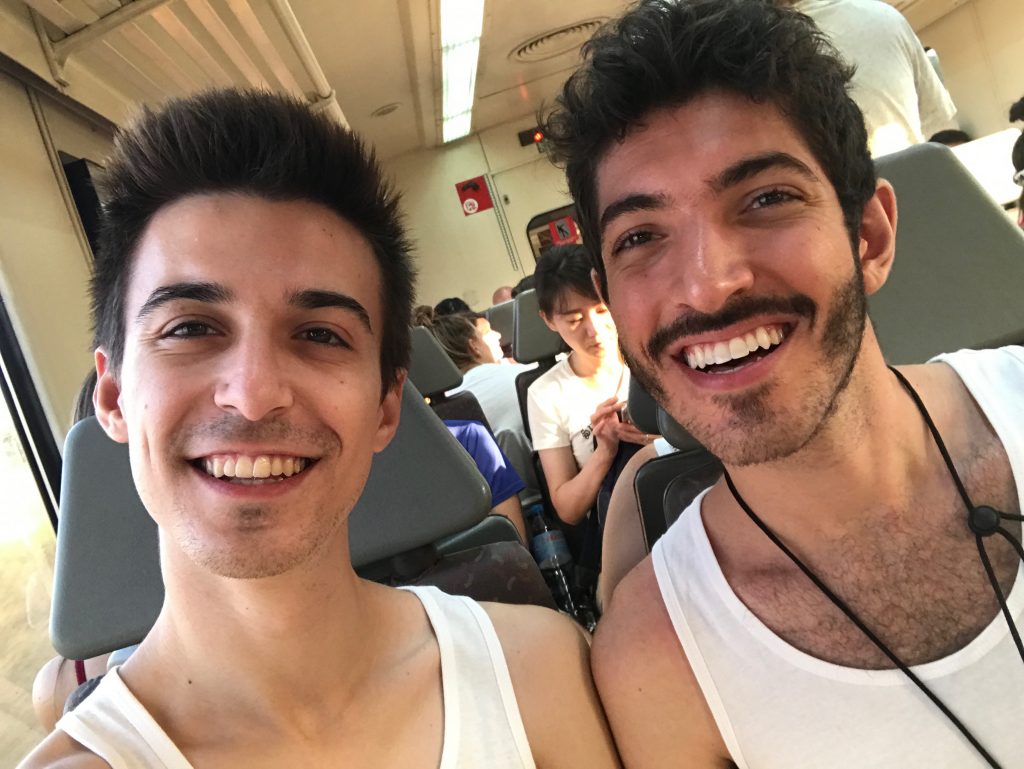 The official rules of the La Tomatina festival are fairly simple. First off, do not attend unless you have purchased an official ticket. Do not bring in any hard objects or any glass bottles that could injure another attendee. (Selfie sticks seem to be acceptable, however.) Do not rip or throw anyone’s t-shirts including your own. (Considering the amount of shirtless men we saw, this rule was either unknown or simply disregarded by the masses.) Squash every tomato before throwing it. (Getting hit with a solid tomato HURTS.) Keep a safe distance away from the trucks (HA – about that…) Respect and listen to all security staff instructions. Stop throwing all tomatoes once the second cannon goes off.

Jorge and I thought we could outsmart the system. Since we planned to share a locker and only I needed googles, we purchased different upgraded tickets. Jorge already had goggles so he got an entry+locker combo ticket. I purchased an entry+goggles combo ticket. 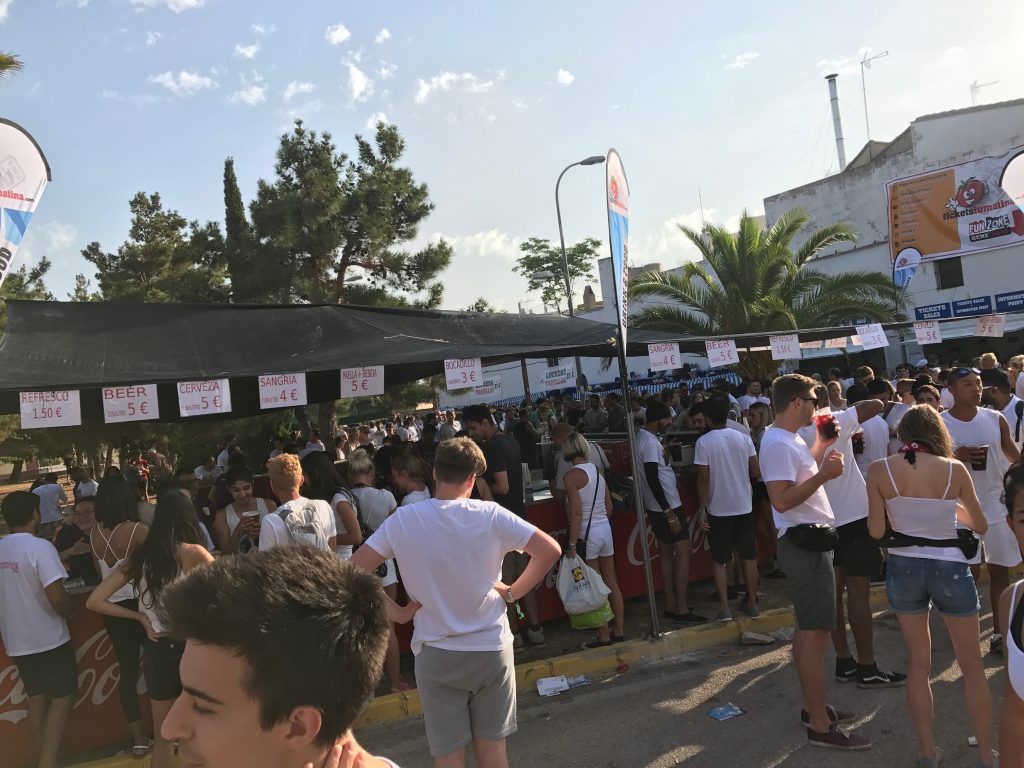 After entering the event, we were met with tons of concession stands selling everything from beer to sangria to 3 Euro bocadillo sandwiches. 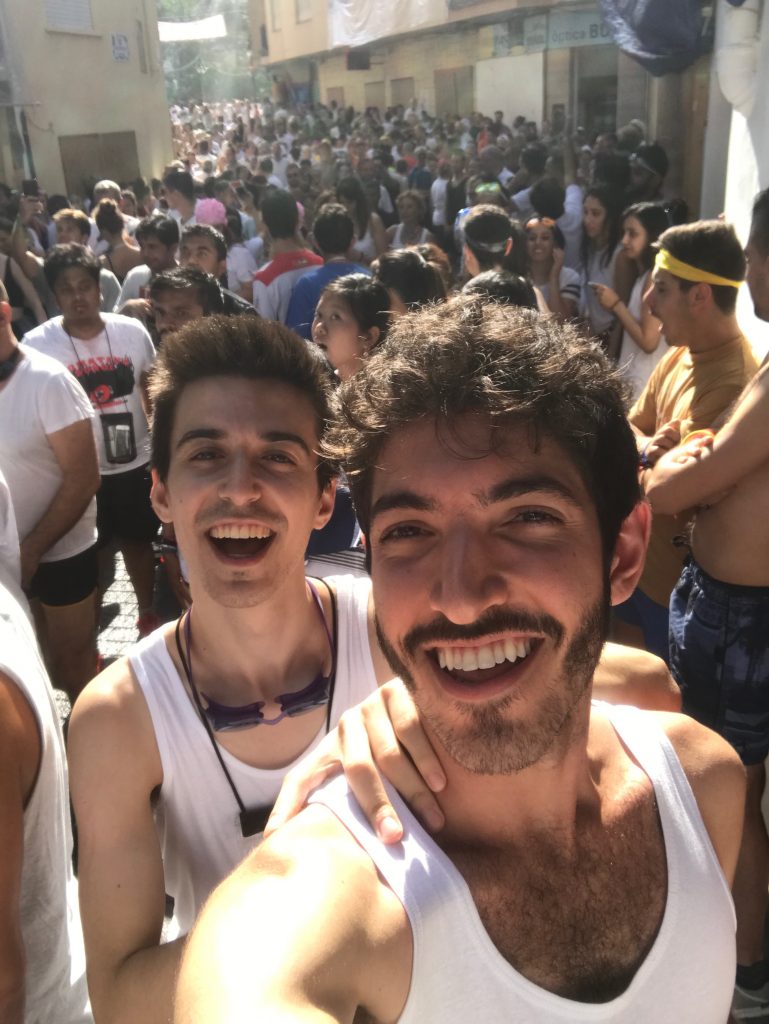 Jorge and I trudged through the crowds of people to find a decent spot where we could stand for the start of the festival. Prior to us attending, I had read some articles online about a pole climbing competition where people compete to see who can reach a special ham at the top. That pole was supposedly an excellent place to be – except, neither of us had any idea where that pole was in relation to where we were standing. With the crowds of people, navigating the streets to get anywhere more than a few yards away from the section’s entrance where you originally entered was nearly impossible. 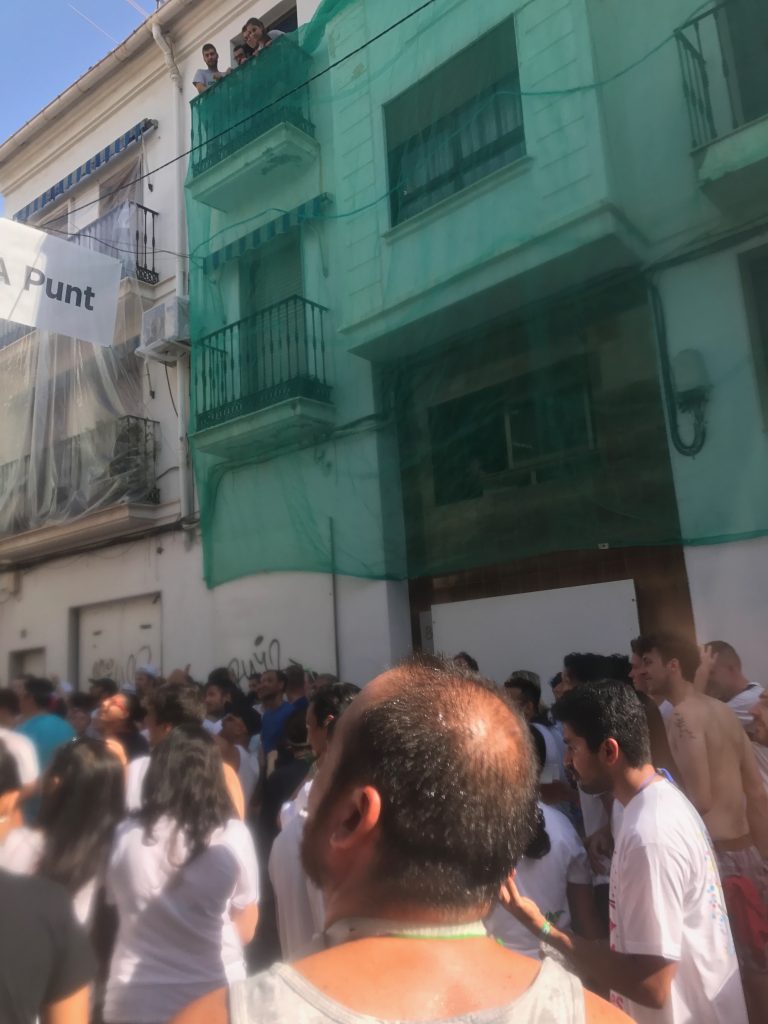 The sun was ablaze and people were smooshed tightly together in the streets of Buñol. The lovely white Spanish-style houses were covered with tarps for protection from the tomato warfare that would soon ensue. The locals surely knew exactly what would be taking place along their streets in a matter of minutes and they looked as though they’d already prepared for this a million times over. 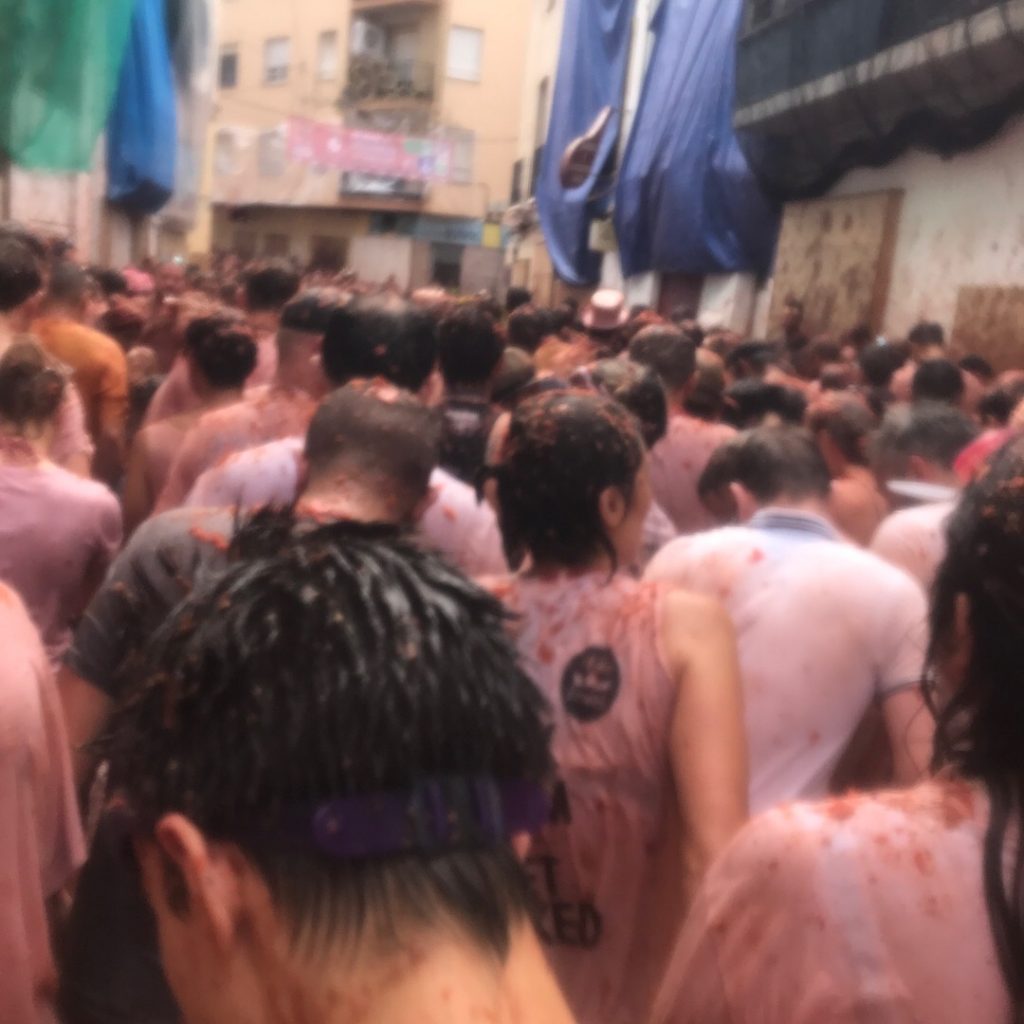 Prior to the start of the event, locals stood from their balconies throwing buckets of water on people to help us all cool down. They also tossed down a few tomatoes to prime us for what was yet to come. I remember at one point, I looked up at the five or six tomatoes soaring through the air and I turned to Jorge and asked, “Do you think there will be any more?” I wasn’t sure if THAT was La Tomatina – a fight using only the tomatoes provided by the locals – and I wondered if Jorge and I had really chosen a bad place to stand.

HAHAHA… Oh, how little I knew! 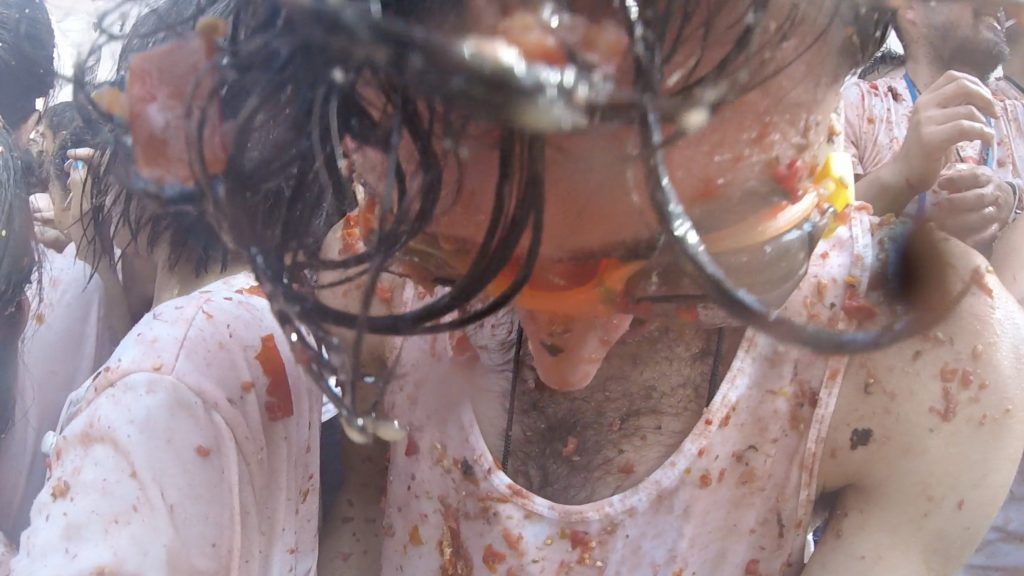 In a matter of minutes, TRUCKS were driving by UNLOADING POUNDS OF TOMATOES ON OUR HEADS. Even with goggles on, I was scared to even look up! I felt like a tomato would smack me right against my face and break my nose.

I actually found a GoPro Hero on the floor in the midst of the chaos. I showed it to Jorge and the two of us tried to look for its rightful owner. As a blogger who takes great enjoyment in capturing and reliving experiences through the art of photography, video, and writing, I couldn’t bear to lose my precious visual memories. If I lost a GoPro with its memory card, I would be devastated – and that’s purely for emotional reasons before even considering the financial implications of needing to repurchase the equipment.

Jorge held onto the GoPro and managed to reconnect it back to its rightful owner!!!!

The video above is edited and cut short for your viewing benefit but we actually looked for a solid 10-15 minutes before we reconnected the GoPro back to the group of girls who lost it.

They thanked us with cute tomato pins which Jorge and I wore proudly. 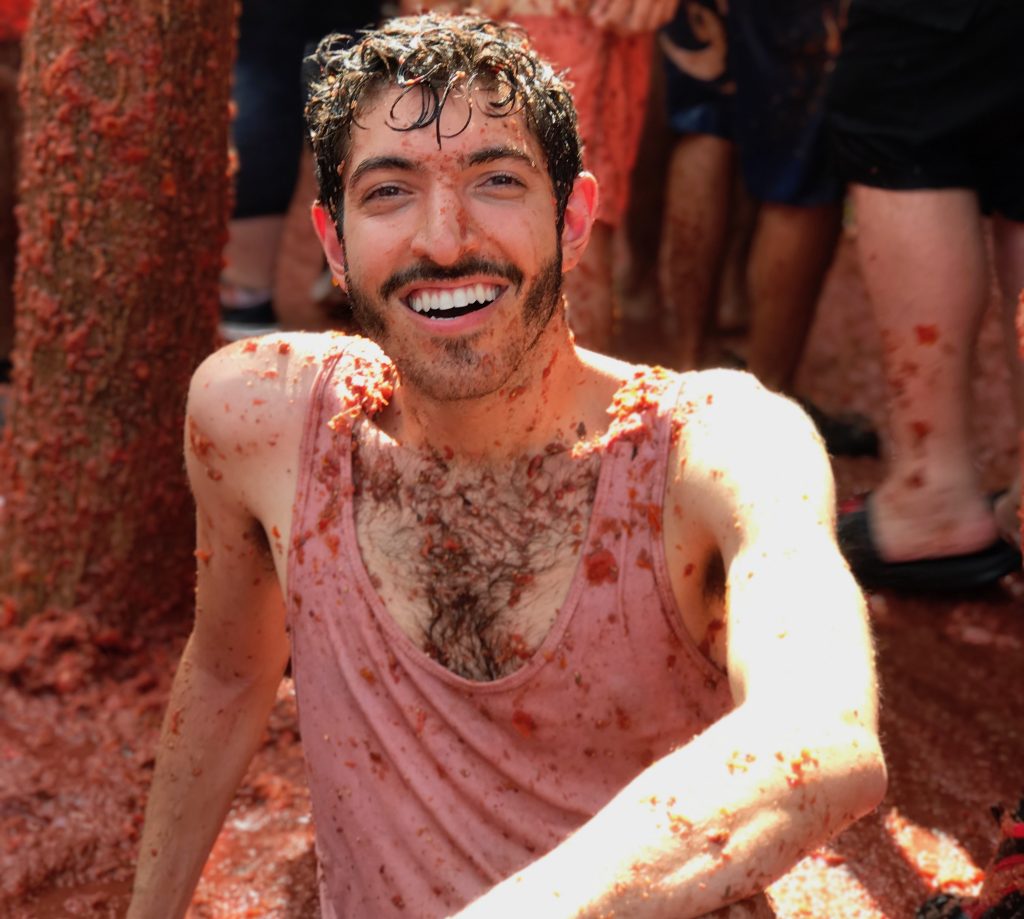 I finally decided to take my goggles off for this picture at the end of the event. I wore them throughout the entire event – I NEVER ONCE REMOVED THEM – and I was perfectly fine all day! I FINALLY decided to chance it and take them off AFTER THE EVENT HAS ALREADY ENDED – and the rotten tomato acid immediately filled my eyes. My eyes tend to get infected and irritated super easily so I generally try not to take any chances. 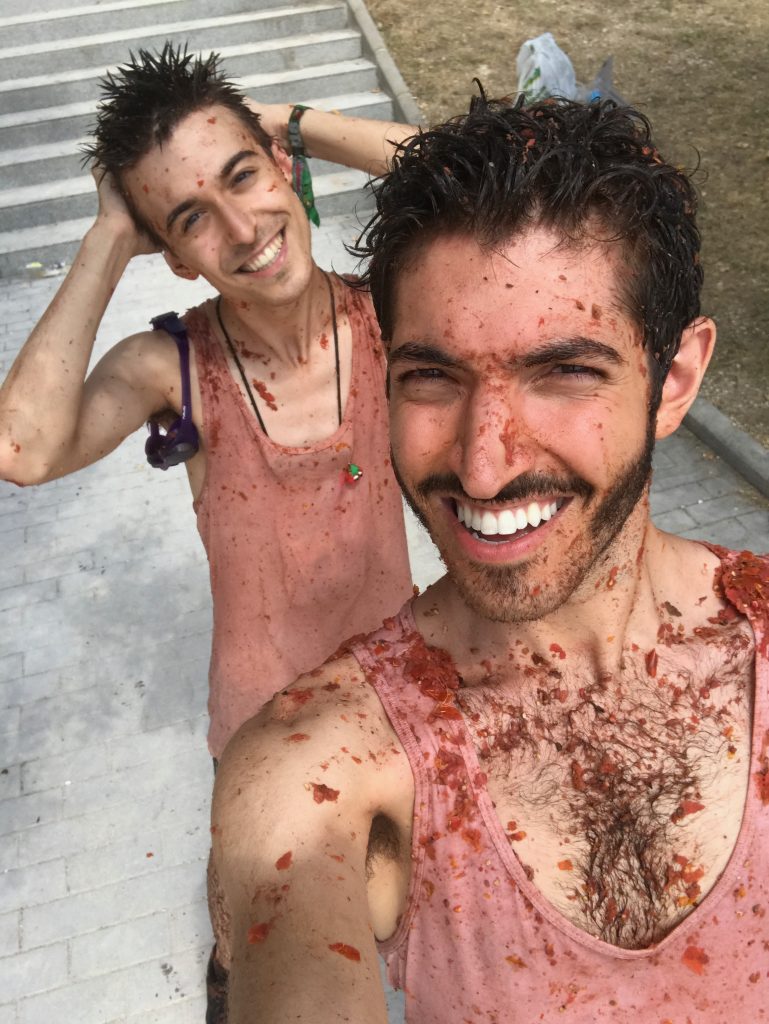 I should NOT have even risked it. As Jorge and I were cleaning off, I started having an extremely difficult time seeing out of one of my eyes. What a scary feeling that was. Concentrated tomato acid burning away my vision as it dried against my cornea.

I asked Jorge to look at it and he told me it didn’t look good.

While my one eye was now as bloodshot red as a tomato and STINGING, I needed to try to clean it out somehow. I couldn’t go into ANY of the buildings to use a restroom sink because tomato chunks and juice were still dripping off every article on my body… I couldn’t use the local’s hoses along the streets to clean my eye because the lines of people waiting to be cleaned off were EXTREMELY long and that sounded far too painful and uncomfortable to try with everyone watching.

I am a seriously anxious person so what was I supposed to do!?

We found a concession stand and bought three bottles of water. On a quiet street, I tilted my head and Jorge helped rinse my eye. It hurt so badly and it was nothing but a temporary fix. For a few seconds, my eye would be flushed clean so I could see. Except, it would soon become all gooey and gross again just minutes later. 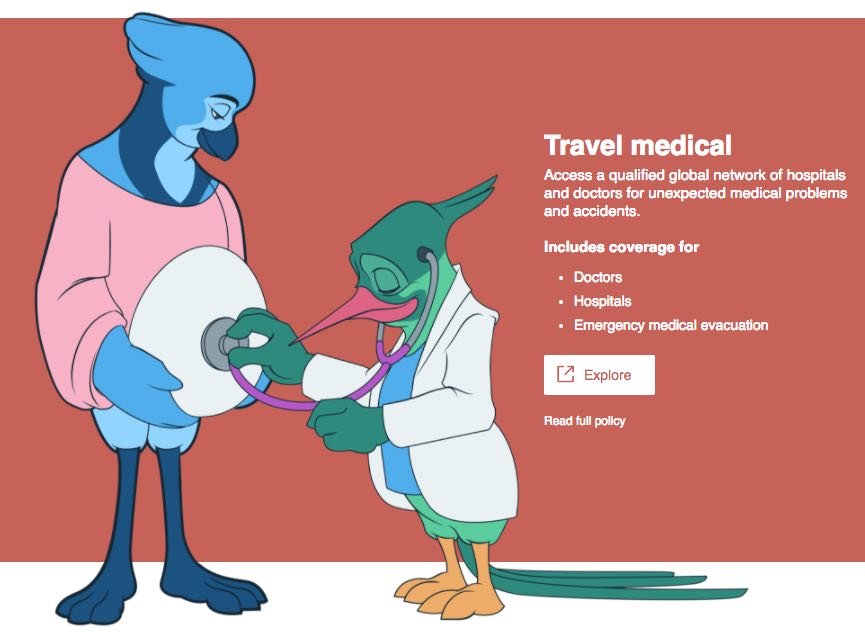 THANK GOODNESS FOR SAFETYWING INSURANCE! This is exactly the reason you should own travel insurance with international health insurance benefits. I can assure you I did not expect to leave a tomato festival with an eye infection.

Whether you are going on vacation or a full-time digital nomad – Click here to purchase travel insurance from SafetyWing.

While waiting for the train home, we called to schedule a doctor’s appointment. My eyes stayed red and irritated for about 2-3 days. Rinsing and showering alone were not enough. The rotten tomato liquid clearly wasn’t the best thing to get in my eyes. I couldn’t avoid it though. No one could! Oh well. I guess I had a stroke of bad luck with it. La Tomatina was still so much fun that it was worth every little bit of discomfort and suffering afterward.