After Jorge and I left our AirBnB in Madrid, we needed to stay in the capital for an undetermined length of time so Jorge could complete his quest to find a new flat to live in come the fall semester when he would be starting his Masters program. Time was running out to find a place and Jorge wanted to be present in the city during the process to check out the places he found in-person.

One of our friends offered to let us both stay with her in the meantime. She had a temporary flat in Madrid for the summer and three of the other rooms in the flat were vacant. We packed up our bags and set off to stay with her.

I wasn’t sure what to expect from the temporary relocation. Our friend’s landlord was trying to quickly fill the vacancies in the flat so people could show up at any point to live in any of the rooms that we might have been staying in. It definitely be an uncomfortable situation if a new tenant showed up and we were just chilling in their new room. Also, it would be stressful for me from a work standpoint since my job requires me to be in a space with reliable Wi-Fi where I can talk out loud (rather loudly) and work for extended periods of time without interruption. I had no idea how any of this would play out in the flat we were going to.

We didn’t intend to stay long so this was really a last resort. The first night, we claimed a room to crash in. We will call it Room One. The following day, I was able to teach from that space and it went well! There was a tapestry in Room One by the window that made for a nice teaching background. Classroom backgrounds were something I had been having a difficult time with both in Greece and in Spain. I never packed a proper portable classroom background so I’ve been on a constant look-out for anything remotely pretty to teach in front of.

The tapestry wasn’t the most ideal background to work with but it was a million times better than anything I had taught in front of up until that point! Unfortunately, I only got to use it for that one day.

Right after work, Jorge and I found out from our friend that the room we had just settled into yesterday was already going to be checked out by a new potential new housemate. We rapidly repacked our bags and moved EVERYTHING over into Room #2.

A man came by to check out Room One: the space we had just rapidly cleaned everything out of. He decided he liked the room so much he would be staying immediately. Oh boy! Jorge and I introduced ourselves to him and explained how we were in need of a place to stay VERY temporarily and asked if he’d mind us staying in the room next door. Thankfully, he was completely understanding of our predicament and didn’t mind us being present in the home in the meantime.

Room #2 was not quite as ideal for work-related purposes but it was still a place to sleep and it had Wi-Fi which was more than enough for us to be productive. I was grateful to have the space considering our unpredictable circumstances. I taught from the room for a few hours. Except as I was teaching, Jorge sent me a message that he found out someone would be coming at any moment to check out the room I was currently teaching in. A female traveler showed up shortly after I read that but it was during my last class of the day so after Jorge talked to her, she patiently waited in the common space for me to finish teaching before entering the room I was in. I felt bad for any inconvenience I’d caused.

She analyzed Room #2 and fell in love. She decided she would be staying there immediately for the remainder of the summer. Now there were two new housemates.

Jorge and I moved our belongings over into Room #3. This was the last open room in the home unless we actually slept on the floor in the same room as Jorge’s friend. The challenge with Room #3 was that the girl who would be living in there was scheduled to move in the next morning but we didn’t know at exactly what time. If we stayed there, we’d have to make sure we both woke up early enough to pack our belongings, clean everything, and leave before she was ready to move in.

That evening, the three of us were having dinner in the kitchen when Jorge’s friend’s phone buzzes. She looks down to check her messages and sees a message that says, “Hi. It’s the landlord. I’m outside with a potential new tenant [who would like to see Room #2.] Do you mind if I show her around the place?” Literally seconds later, they were knocking on the door to enter the flat!!

THE LANDLORD HAD DROPPED BY UNANNOUNCED! 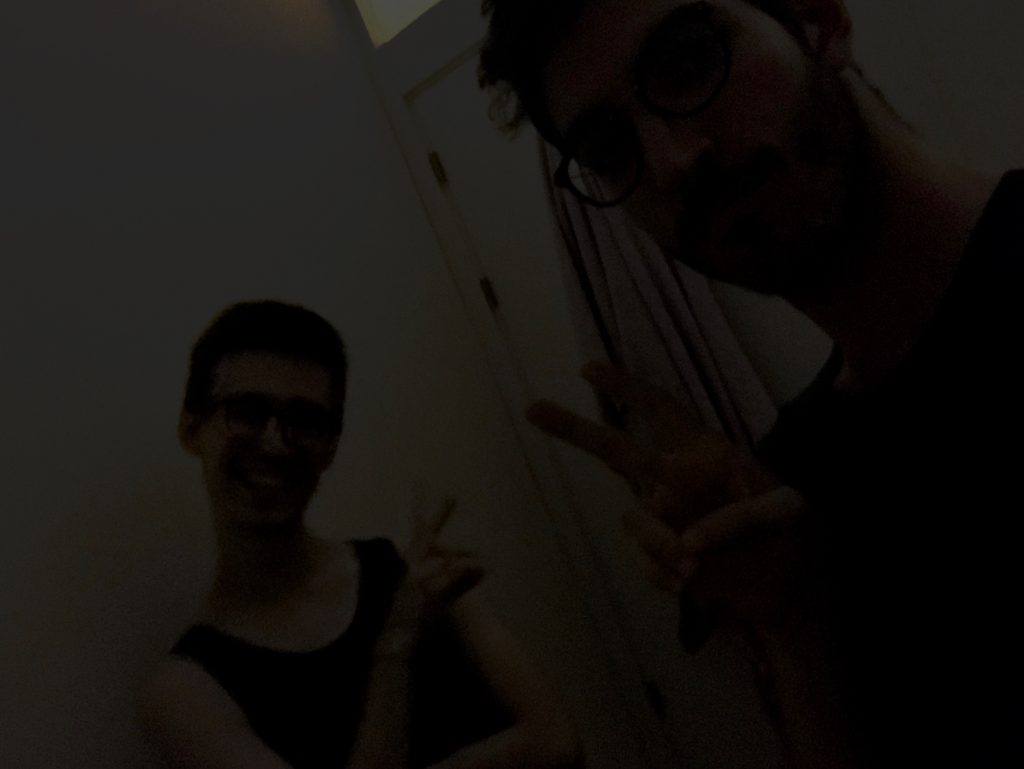 There was nowhere left to go. There was no time to think. We probably could have passed just as friends visiting for dinner but if the landlord saw the suitcases and backpacks, it definitely would have raised suspicion. (Never mind that we genuinely arrived only yesterday.)  In that moment, before we could even actually think about what to do, we were already rushing into Room #3 where we nervously sat with the lights off. Jorge seemed far more calm meanwhile my heart was having palpitations at the thought of the landlord entering the room. I was sitting in the darkness, NOT HIDDEN AT ALL… just waiting for him to open the door, see me crouching on the ground, scream, and shout, “WHO’S IN THERE!?”

The good news is that since Room #3 was already going to be rented out to someone, the landlord had no reason to enter. The best thing we could do was stay quiet, wait it out, and begin to draft our explanation and apology letters in case of a confrontation.

The landlord sat in the kitchen talking with our friend for eons. She was desperately trying to divert his attention to anything she possibly could so he wouldn’t be tempted to approach Room #3. As we sat in silence, the landlord talked…. and talked…. and talked some more. I found the situation especially stressful because I had absolutely no idea what the landlord was saying in Spanish so I felt on edge the whole time. With the brightness turned down, Jorge and I kept passing my phone back and forth so he could help me understand what they were talking about.

We must have been sitting in the dark holding our breath for somewhere between twenty to thirty minutes. During that stretch of time, every second felt 5 times longer. Finally, the landlord left to flat and our friend came into our room speechless. WE WERE ALL SO SHAKEN UP. Our friend told us she was so nervous we’d get caught, she re-microwaved her milk 5 times just to keep making background noise while she had him in the kitchen.

We stayed that one last night and then left the next day. As far as we know, our friend was allowed to have guests so theoretically everything should have been fine with the vacant rooms but since the lines were blurred on what was right, we decided to err on the side of caution and leave promptly. We certainly never wanted to be a source of trouble for anyone so it was easier to eliminate all the fuzzy borders by traveling again. We were both grateful to have had a place to sleep for those two nights but we took care of what we set out to do so it was now time to leave. Jorge and his friend both successfully found places to stay come the fall semester and with that task completed, we agreed it was time to proceed onward!