As someone who has been incredibly obsessed with the Myers Briggs Personality Type Indicator since the day I got my results, I suppose it was only a matter of time until I ventured off to take the Strong Interest Inventory. 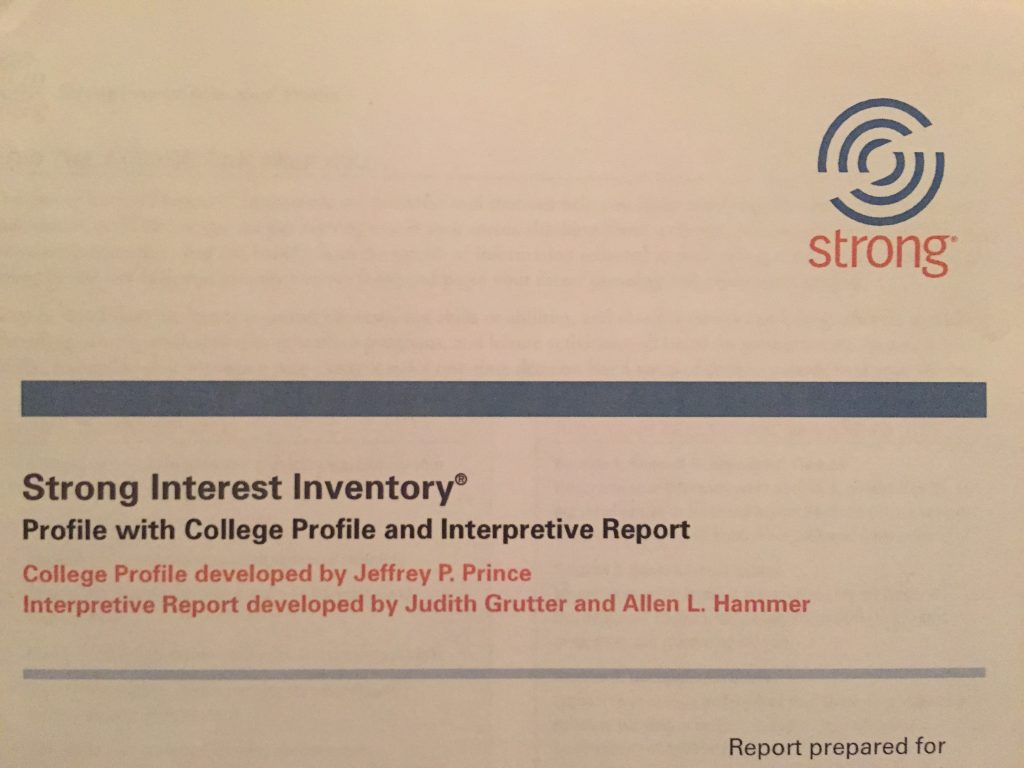 Similar to the MBTI, the Strong requires participants to complete an online assessment. Unlike the MBTI, the Strong will display a condition and you have to quickly indicate whether or not you like or dislike such a scenario. If you think for too long, it will move on. You must go with your gut; they don’t want you overthinking it.

Following the completion of the assessment, certified professionals interpret your report and then meet with you one-on-one to discuss the results. The Strong Interest Inventory results in a three-letter code called a Holland Code.

A Holland Code is made up of three primary letters (technically followed by another 3). To put it simply: it ranks 6 work conditions from the most similar to you to the least. The six letters are C, R, S, E, I, A.

My Holland Code was: SEA (I,C,R) though, I think I actually fit SEI (A,C,R) a little bit better.

This means my work preferences are: 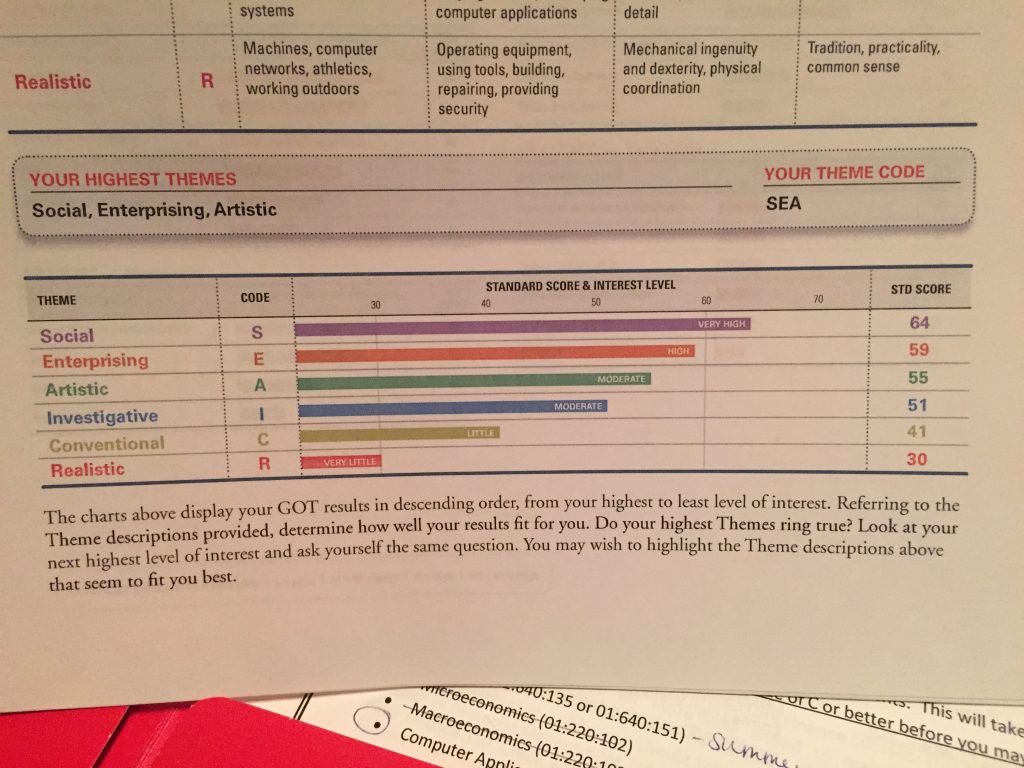 Following that, the report will list the top ten occupations that match your Strong Theme Code. I think part of me was hoping to see “Psychiatrist” appear on the list since I’m currently working my butt off in my pre-med courses trying to go to med school so I can become one. As much as I enjoy my science classes, they’re far from easy.

However, “Psychiatrist” did not appear on my top 10 list. In fact, I was quite surprised by the occupations that did. Perhaps the most shocking one was number one. 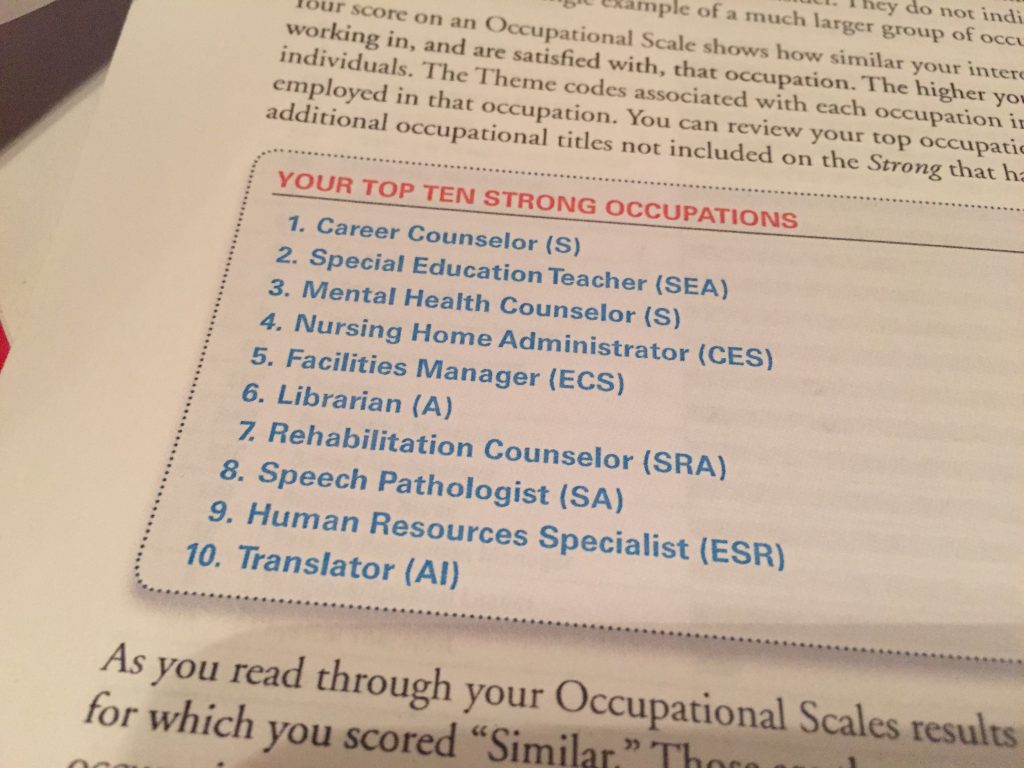 The funny part is that I actually think I’d enjoy being a career counselor. I’ve dedicated so much time throughout my life to “finding my purpose” and I thoroughly enjoy helping other people find theirs. It is something to think about if the opportunity should ever arrive.

My main concern is that in order to get into medical school and to ultimately become a psychiatrist, I have to take general science courses like physics and organic chemistry. I really like general chemistry so far but I remember finding physics in high school really difficult. Then, when I look at the prospects of me becoming a physicist or chemist according to the STRONG, it slightly concerns me. 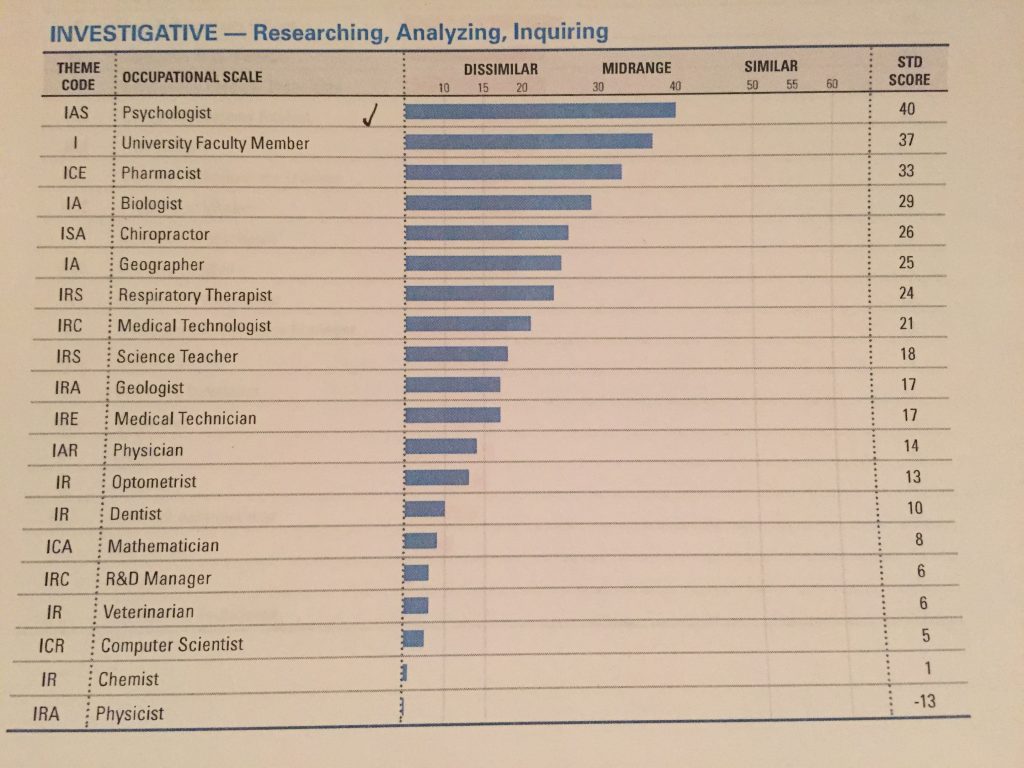 LOL physicist is the LOWEST occupational score for me across the board. Even compared to those listed in LOWER themes like “Realistic” and “Conventional”! IN FACT, IT’S A NEGATIVE NUMBER. I didn’t even know that was possible.

I’m not sure how to proceed from here. Do I continue to pursue psychiatry and take physics and orgo next year? Or do I take a hint that physics is going to be a nightmare and switch to something else that won’t require medical school? Hm…