Weeks had gone by before I ever actually made it to Greece’s most famous attraction: the Acropolis! With each passing day, I began to wonder more and more when I’d finally make it to the famous ruins. The first week was far too hectic while I learned the city of Athens, then the weather took a turn for the worse and it seemed as though there were no days with ideal weather (even though every day they claimed there would be rain…. there really wasn’t.) Despite having no concrete plans, it took ages to fit the marble ruins into my schedule. 😉 Thank goodness, Jorge and I finally decided one day to go no matter what.

We woke up bright and early one morning and decided to go no matter what the conditions were like. We heard from locals that the line for the Acropolis can get excessively long as the day goes on and large tour groups accumulate. One person said it isn’t unusual to encounter wait times over two hours long. With the sun beating down on you while you wait, we opted to head there early to hopefully beat the crowds. 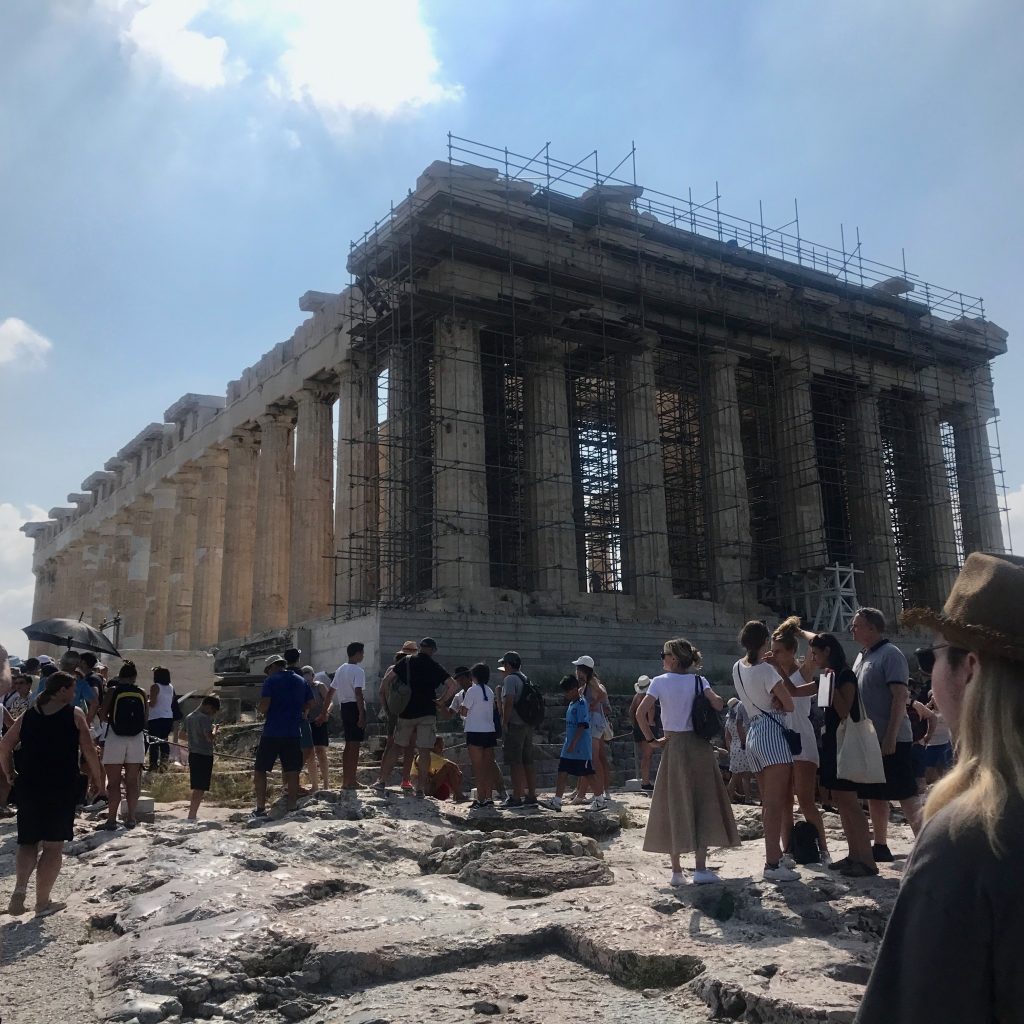 The Acropolis was a sight to behold. We stood in awe before what remains of the structure after invasions, attacks, and the tests of time. The Parthenon, the most famous part of Acropolis Hill, was absolutely stunning. Due to restoration efforts, the front of the Parthenon was fitted in metal caging. I’m not sure how long it has been like that nor how long the restoration process will last. While I do think it took away from the beauty of the Parthenon, there are two important things to consider. First, the other three sides of the Parthenon don’t have any major restoration so you can view it from other sides regularly. Second, one of the things I thought about while looking at the Parthenon was that I would have really liked to see it as it stood back in ancient times, as opposed to in ruins. The only way that can ever happen is through restoration efforts like the ones that are currently taking places. 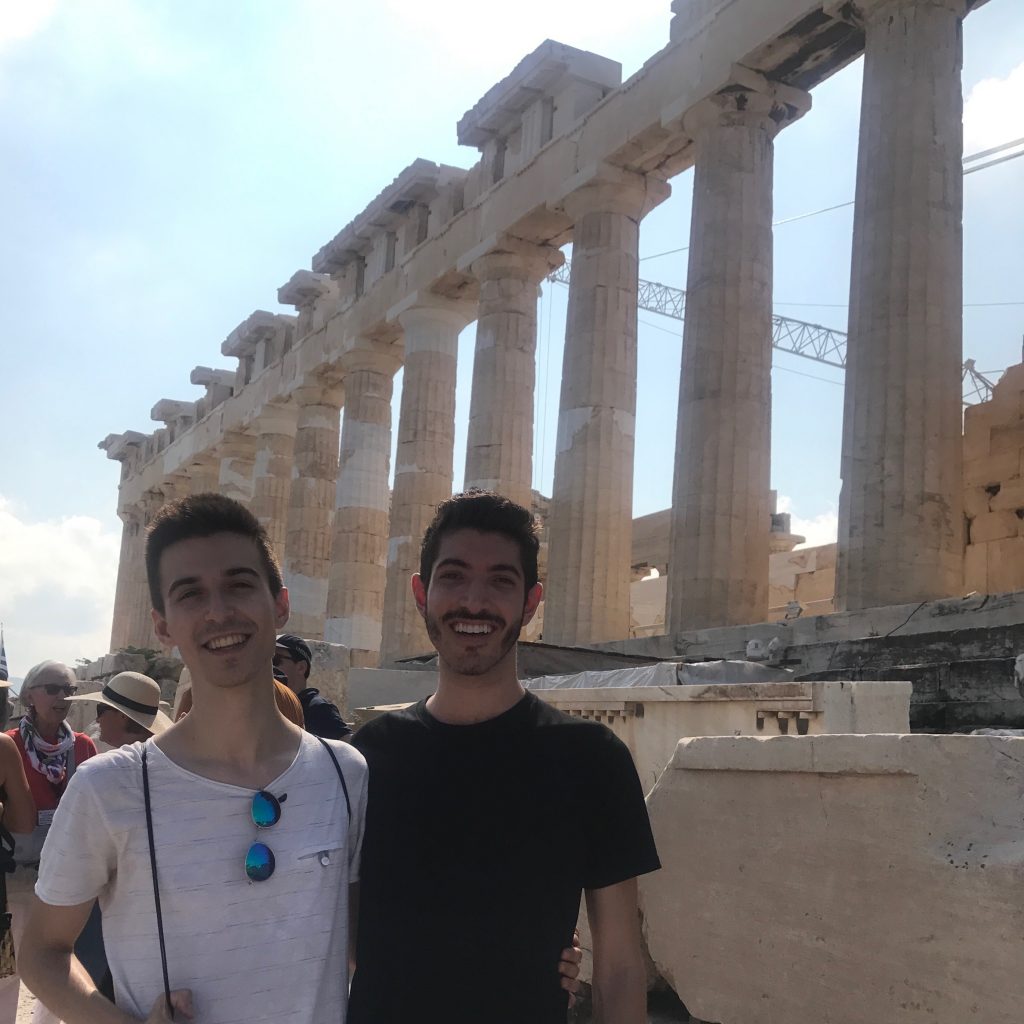 The artificial replacement pieces that are getting inserted back into the Acropolis are a different color than the original marble. You can see examples of this by looking closely at the background of the photo above. While some people seem particularly upset about this disconnect between the past and present, my opinion is that it is actually better to restore it in this way. By making the colors different, you can differentiate which pieces were the original ruins and which ones have been replaced due to years of destruction, instability, and aging. 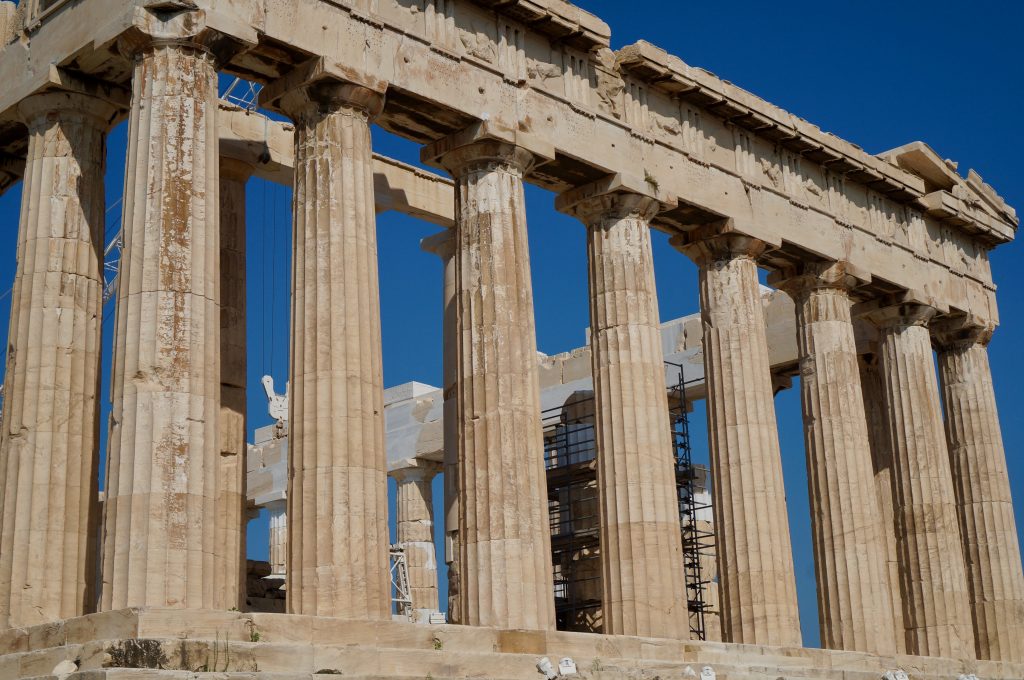 On the topic of admission, there are a few things to know.

University students from within the European Union are granted free entry to the Acropolis and Hills. Jorge was able to enter the historical sight for free since he is a student. As a general admission entrant, I was required to pay 20 Euros. Even though I had already been living in Greece for weeks, this was one of my largest one-time expenses while in the country. Still, I didn’t mind paying to see such an important historical sight. 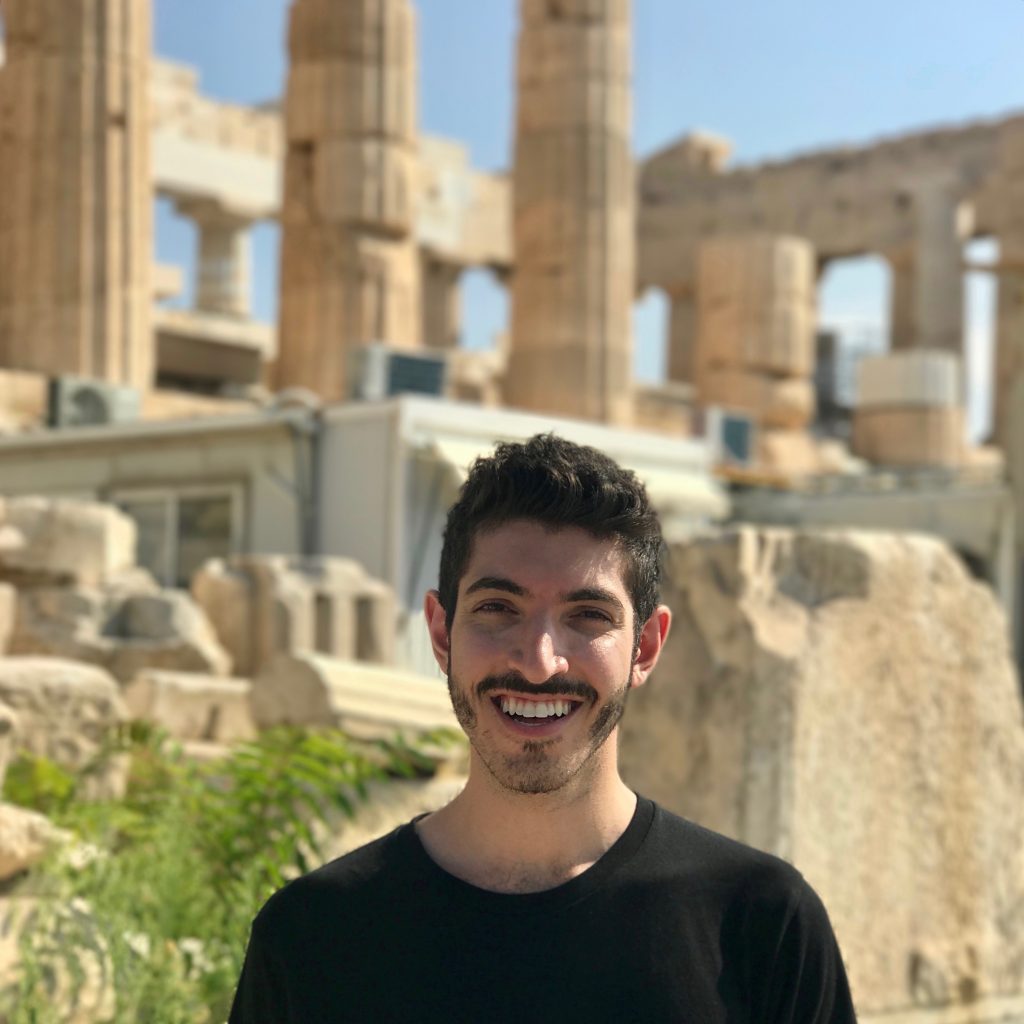 You can buy a multi-day pass that gives you access to all of the major tourist spots in Athens. If you use that, it costs $30 for 5 days of access, you can buy it at the National Archaeological Museum of Athens where it is less busy and skip the long line at the Acropolis. While I did not do this, I would say it is worth it. Buy it on a Monday since many of the attractions are not open on the weekend.

The uphill walk to reach the Parthenon was filled with historical areas to keep you busy along the way. Still, my favorite part of the journey up was the incredible view of Athens. 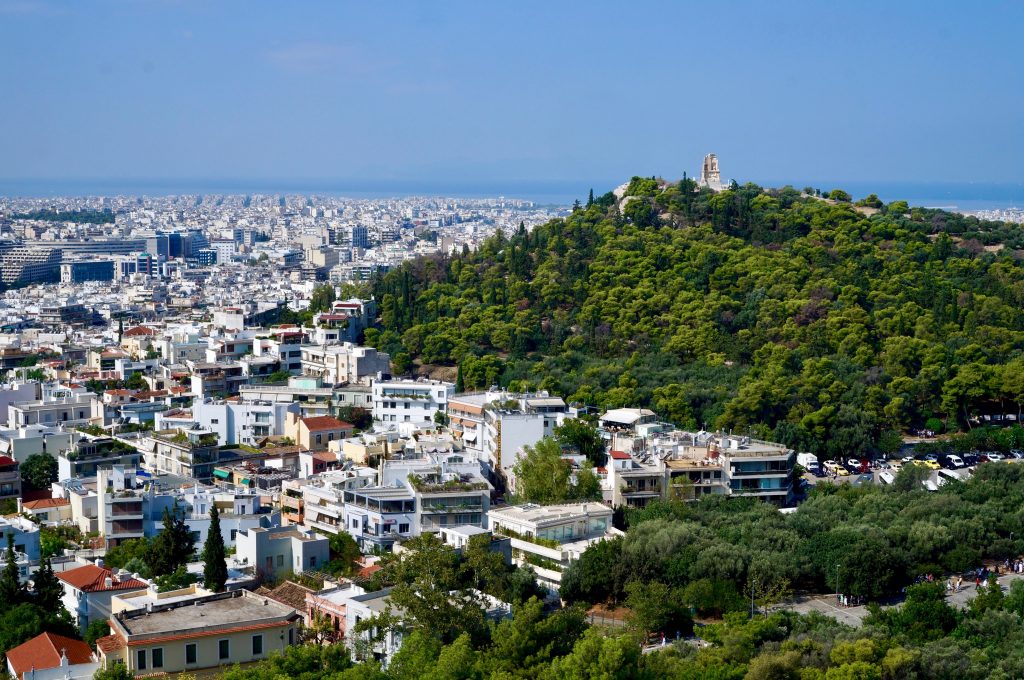 While this seems pretty obvious in hindsight, one of the biggest surprises I found while visiting is that you really can’t get very close to the Acropolis. I guess ancient ruins aren’t the safest place to have tourists walking under. For whatever reason, I thought you could actually enter the Parthenon but that is not the case at all. The ruins can only be viewed from a safe distance – likely for both for the safety of the individual and the structure. 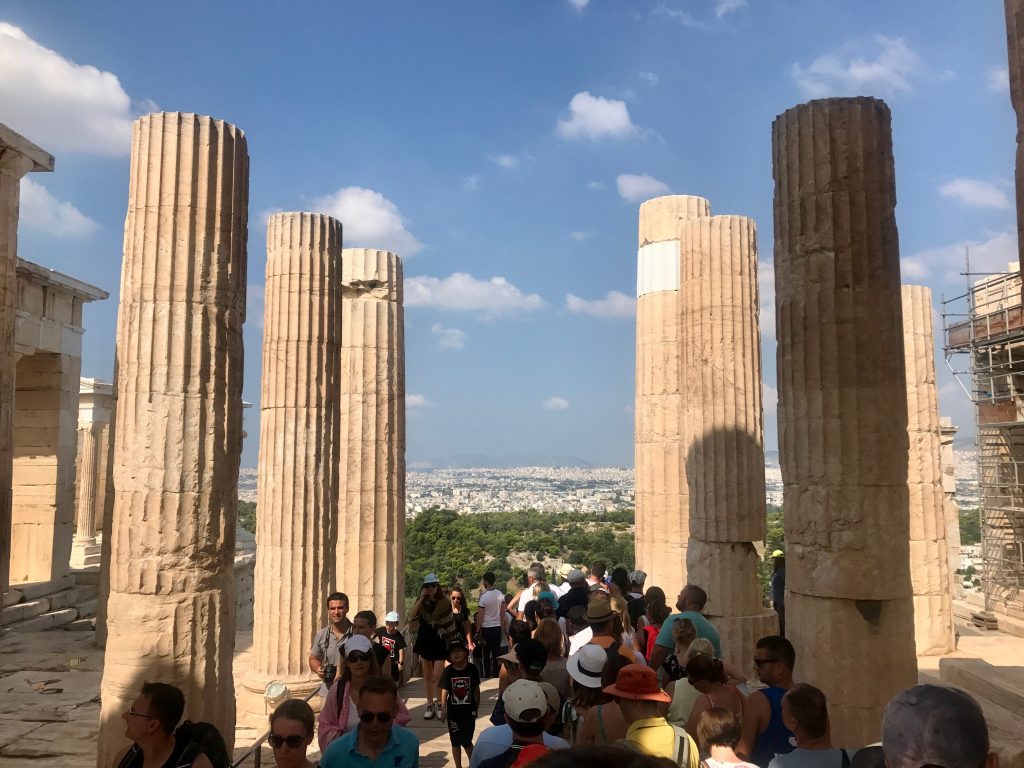 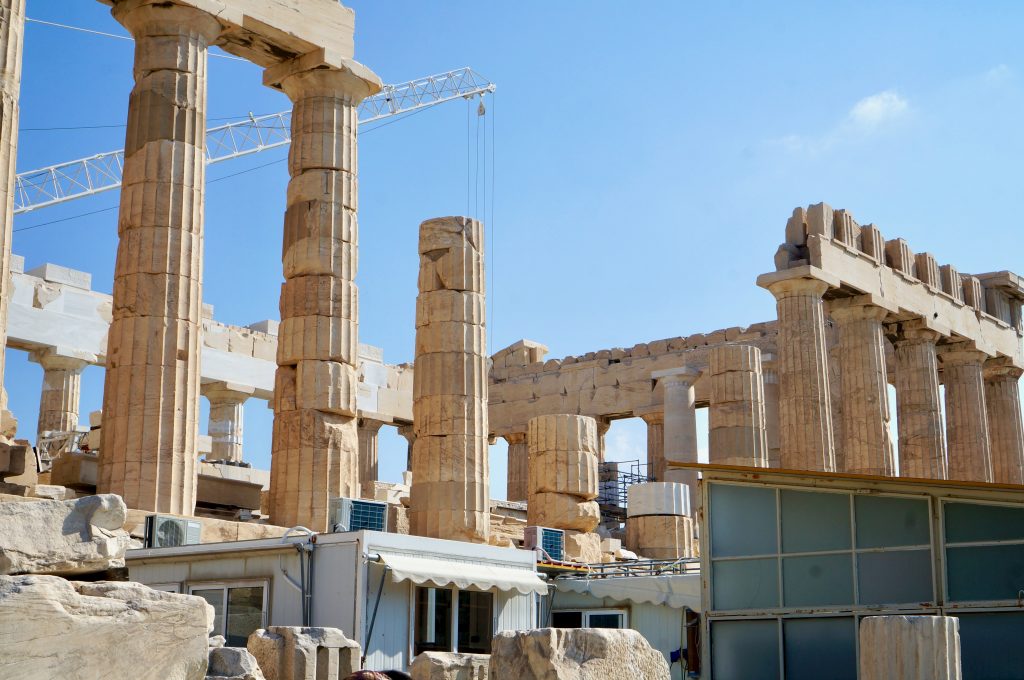 The most interesting thing I took away from the museum visit was a better understanding about the many invasions that occurred in ancient Greece. Part of the reason the Parthenon looks like this in the present day is due to a huge explosion that blew out the central portion of the building. After the Ottoman conquest, the Parthenon was turned into a mosque in the early 1460s. In 1687, an Ottoman ammunition dump inside the building was ignited by Venetian bombardment. The resulting explosion severely damaged the Parthenon and its sculptures. 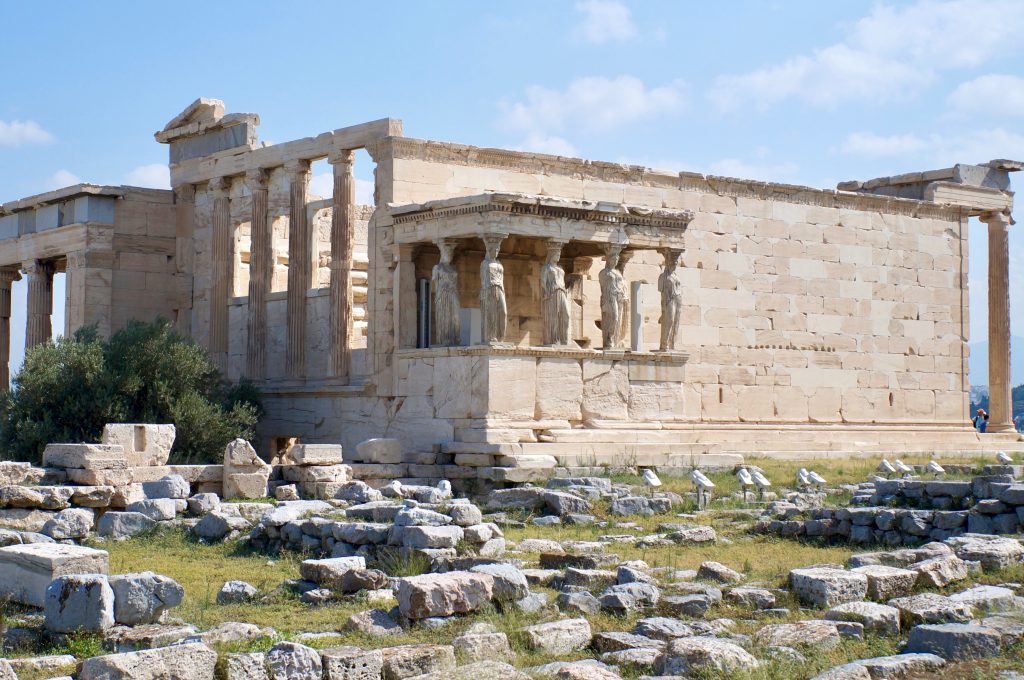 Let us not forget the Erechtheion. Since I couldn’t say the name of this structure properly, I simply referred to it as the Ech-nech-hech-agon while talking to Jorge. Prior to the museum visit, I didn’t know the Acropolis Hill had other structures besides the Parthenon so this was another big surprise for me. Now that I am seeing the proper spelling side-by-side with my nickname for the Erechtheion, I realize I was nowhere close to being correct. However, too much time has passed so I fear I will forever continue to remember this sacred building with the false name I’ve generated for it. The Ech-neck-hech-agon is one of the most mysterious structures in Athens because despite having been built on sacred land, scholars cannot seem to agree on what purpose it served.

The Acropolis (and Museum!) were well worth the visit. Numerous times during my trip, I feared I’d waited so long to go that I would ultimately leave Greece before I could visit the Parthenon in person. Thank goodness, Jorge and I made it there just before our final days in Greece! 🙂