Throughout my first few days in Greece, I spent a lot of time exploring the strip between Syntagma and Monastiraki, two of the major city squares in the heart of Athens. While deciding where to get dinner, I spotted a nearby side-road with a bunch of cute restaurants. One in particular caught my eye: it was called Oven Sesame. 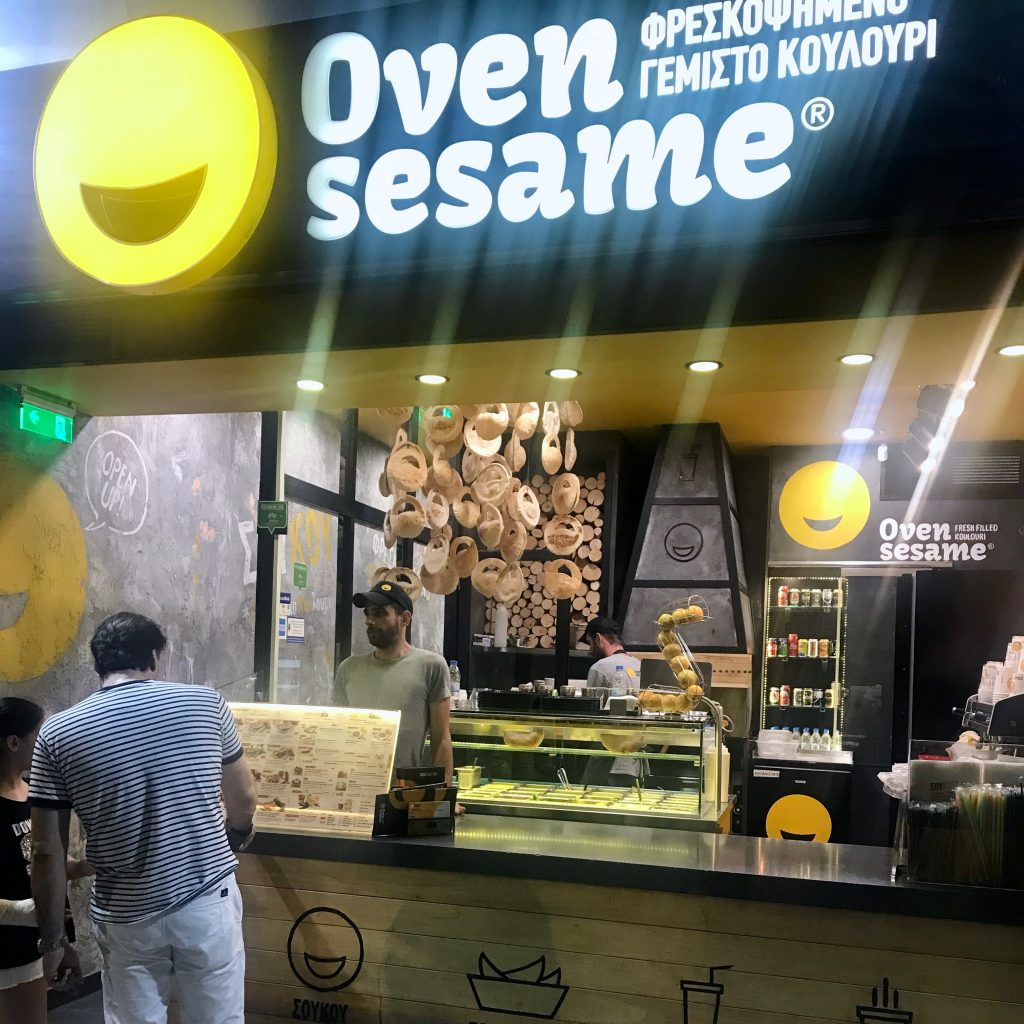 I decided to try their fresh filled koulouri. In Greece, it is not uncommon to see busy workers running to work in the morning with a “koulouri” (circular sesame bread) along with a coffee. This is a common and popular street food. It can be bought plain or stuffed. Depending on the size and what it is stuffed with, a kourlouri can make for a delicious meal. I ordered a spicy one stuffed with beef, lettuce, tomatoes, and more. It tasted delicious. 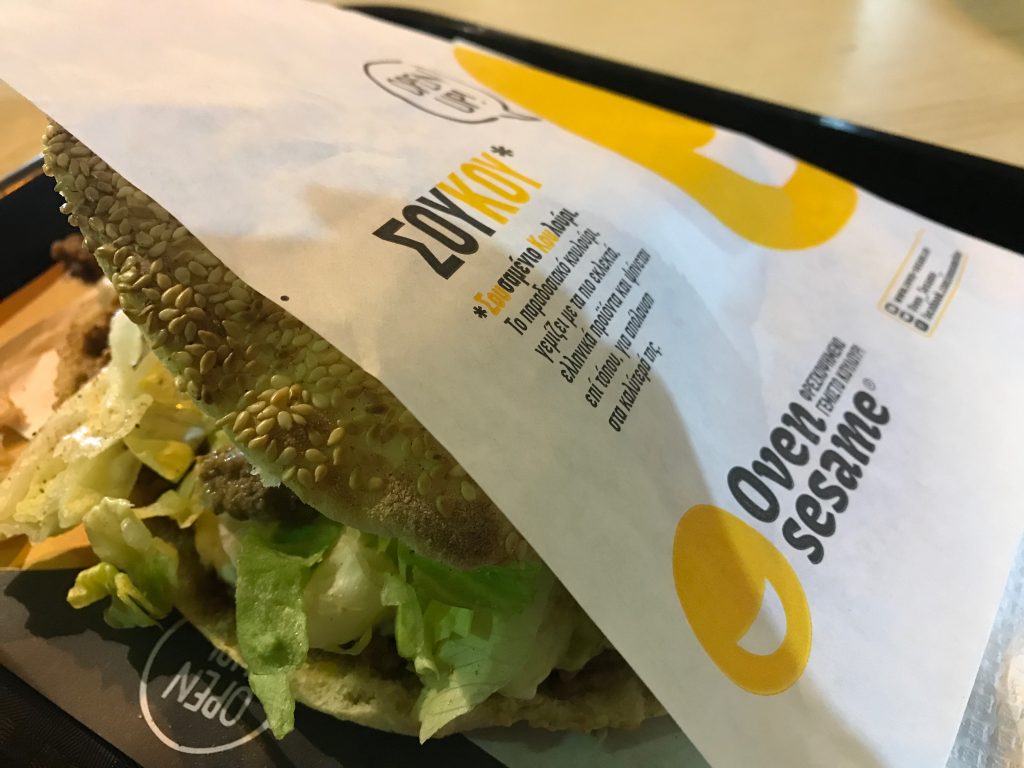 To preface this story, a major observations I had about Athens was that I had not noticed much of a LGBT presence in the city. Several days had gone by after my arrival and I never once saw two men holding hands, hugging, kissing, nothing! I wasn’t sure if that was by chance or if there might have been something about the culture here I was not aware of. In Spain, I felt like being gay was far more normalized and accepted than what I was even used to. This was a totally different feeling. I couldn’t spot any of the gays…

That is, until I ordered a koulouri. 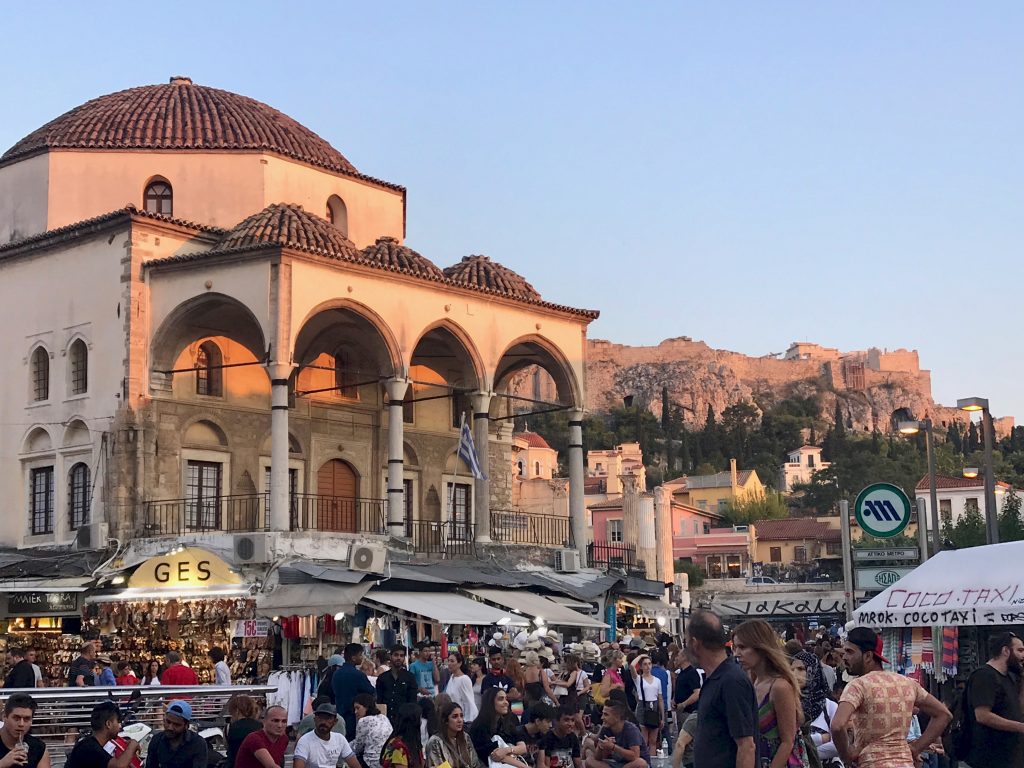 That night, as I ate my meal, my gaydar started to go off. Suddenly, I felt surrounded by a few men that I had a few suspicions about. It was the strangest thing. It piqued my interest but I assumed the odds were that eventually I’d find gay people somewhere in this major city. Guess this happened to be that place.

A few nights later, I returned to the same street to continue the investigation. Once again, I immediately started to notice… differences in the men around me. Why was Monastiraki Square attracting so many gay men? I walked further down the street and picked a different restaurant to eat at.

At the next place, I ordered my dinner and sat down at a long table where other people were already eating. Unfortunately, I had a little mix up with one of the cashiers because I thought he short-changed me 20 Euros after I paid cash for my meal. A local who was eating at the same table overheard the conversation and I guess he wanted to help settle the confusion so he told me to eat my food while it was hot because it wouldn’t taste as good cold. He was right. Meanwhile, the cashiers did their due diligence to check the register so they could compare it to the sales they made that day. He told me what he saw happen (since he was in line behind me) and I realized I think I actually was at fault and made a stupid mistake because I was overly tired. I felt horrible. I apologized to the staff for the confusion and started talking to the local I was having dinner with to get my mind off of the embarrassing situation I caused.

As we talked more, I started to ask more specific questions about the city of Athens along with other parts of Greece that might warrant a visit during the time I have here. We had a really interesting conversation. Not only did this local speak English, he was familiar with the part of the USA where I am from. He is a doctor and explained that he has even gone to Rutgers University for a small portion of his education!

Through our conversation, I realized we were actually in the “gay part” of Monastiraki Square. It was a small section of the city where there are a few gay bars close to the Church of Agia Eirini. Rooster, perhaps the most famous gay bar in the area, was just around the corner. No wonder my gaydar has been going off ever since I first found the street. 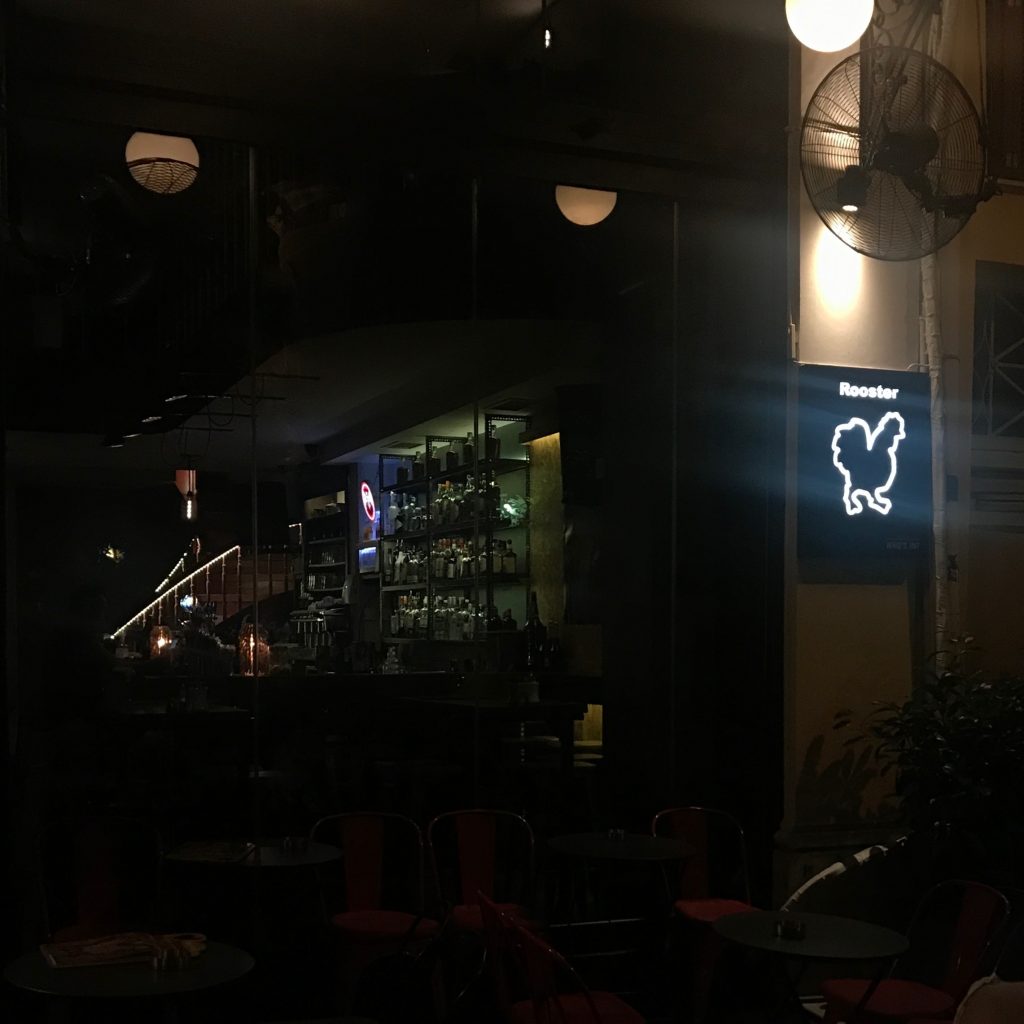 We ordered iced teas and he gave me a personal walking tour of the nearby area. He showed me some of the famous landmarks worth checking out, the best places to eat, the most scenic bars near Monastiraki, and which stores to buy different things at. I couldn’t believe someone from Greece was really showing me the city so soon after my arrival. As an America, I found this openness both shocking but also enticing. I found myself having a bit of a guard up even though he did not in particular to warrant it. I didn’t want anything bad to happen so I was being cautious but he seemed to genuinely want to help! 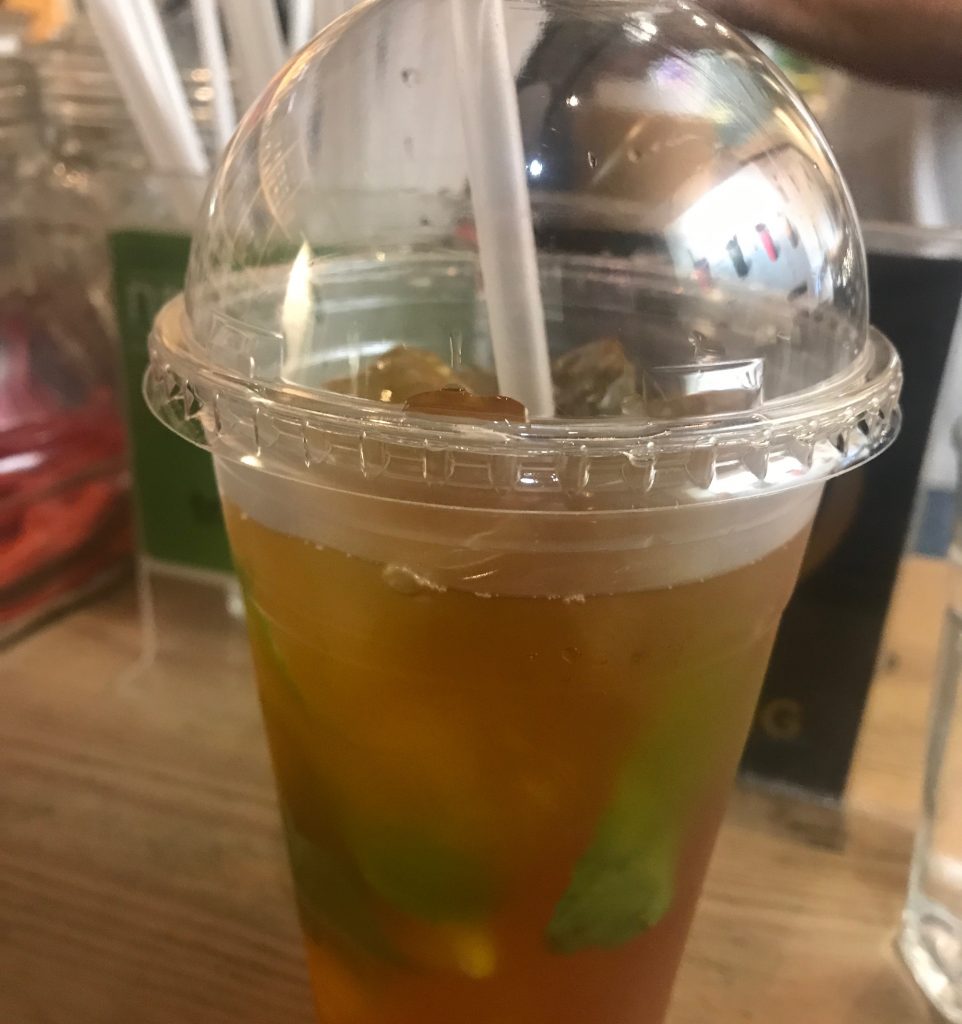 We found a bunch of gay places. I thought it was interesting that he used the word “alternative” in place of “gay” while describing such locations. I guess he didn’t want to offend me since I never explicitly said I was gay to him. Still, that happened to be a main theme throughout my tour of the Monastiraki area. A gay city tour, even better. 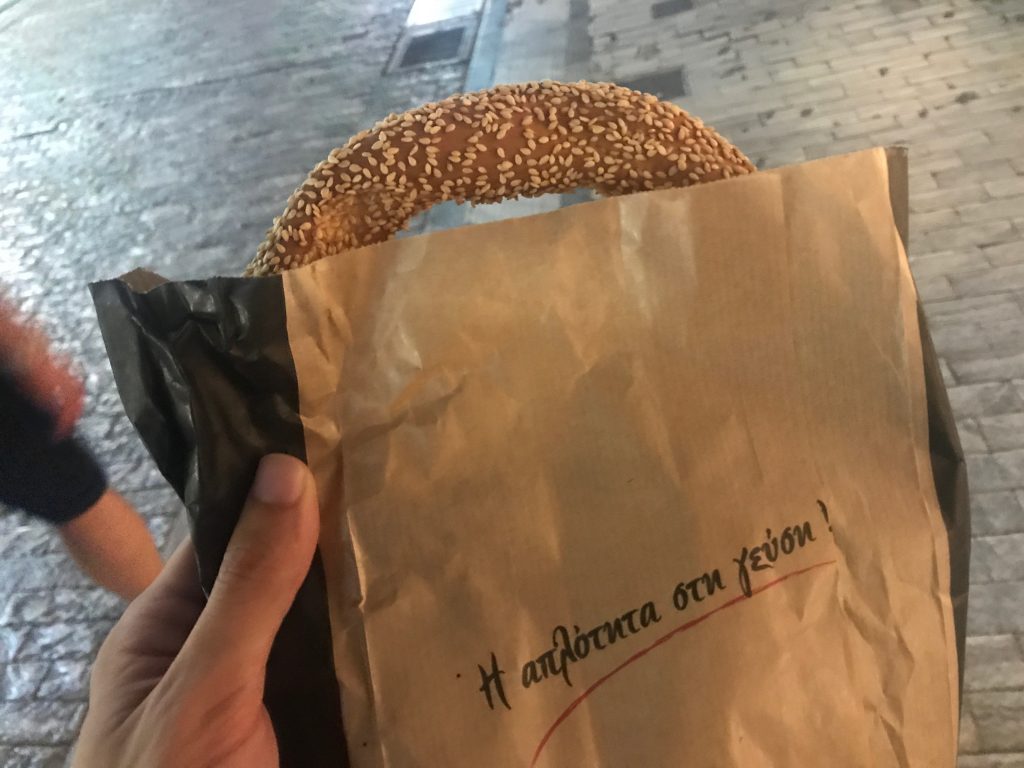 Finally, we went back full circle and ended the night with a koulouri treat. It was at that point that my new friend explained its cultural significance to me. Thanks to him, I quickly got acquainted to the area, found new places I’ll need to return to, and understood that much more about this great country. I felt so relieved to find a gay neighborhood. Discovering this area was totally accidental. It was all thanks to my shaky, foreign gaydar and some bad luck.

Welcome to The Rocky Safari

Hi, I'm Rocky Trifari. I am a huge proponent of long-term travel as a lifestyle. The Rocky Safari chronicles my strangest experiences around the world. I share stories about the most bizarre situations I have found myself in while exploring. My goal is to visit every country.

The Blog
My World Map
About Me