I traveled to Zadar, Croatia with few plans in place other than to see the famous Greeting to the Sun.

During my first day in the city, I had decided a visit to see this monument would become my top priority. I would spend my first Croatian sunset watching a spectacular show of rainbow lights. 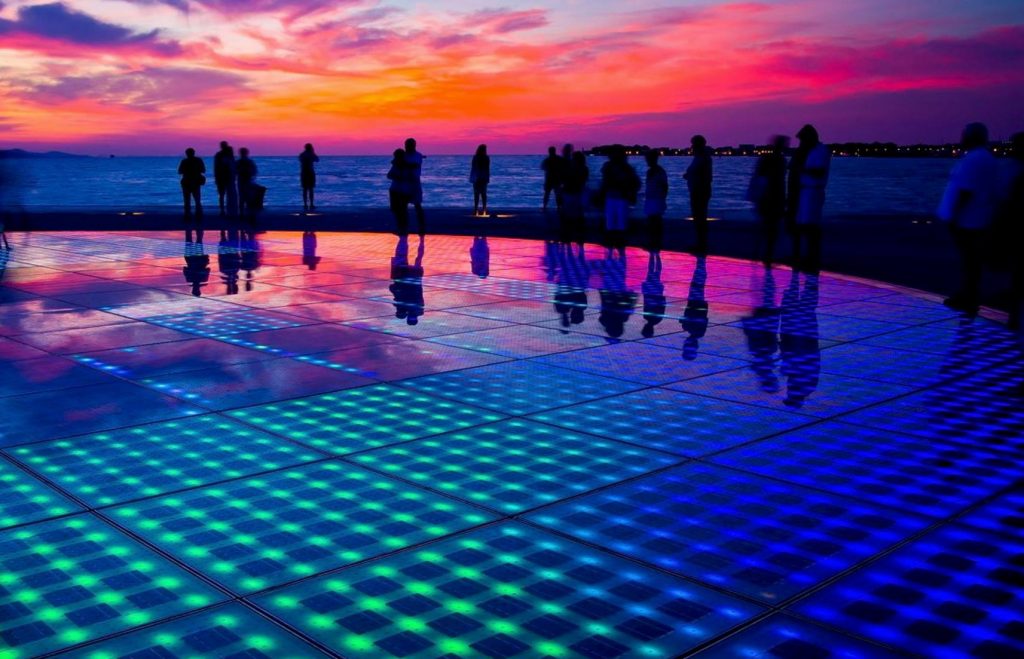 Zadar’s Greeting to the Sun

The Greeting to the Sun or Sun Salutation (Croatian: Pozdrav suncu) is a huge monument in Zadar dedicated to the Sun. The art installation consists of three hundred multi-layered glass plates arranged along a stone-paved area at the corner of Zadar’s peninsular edge near the water. 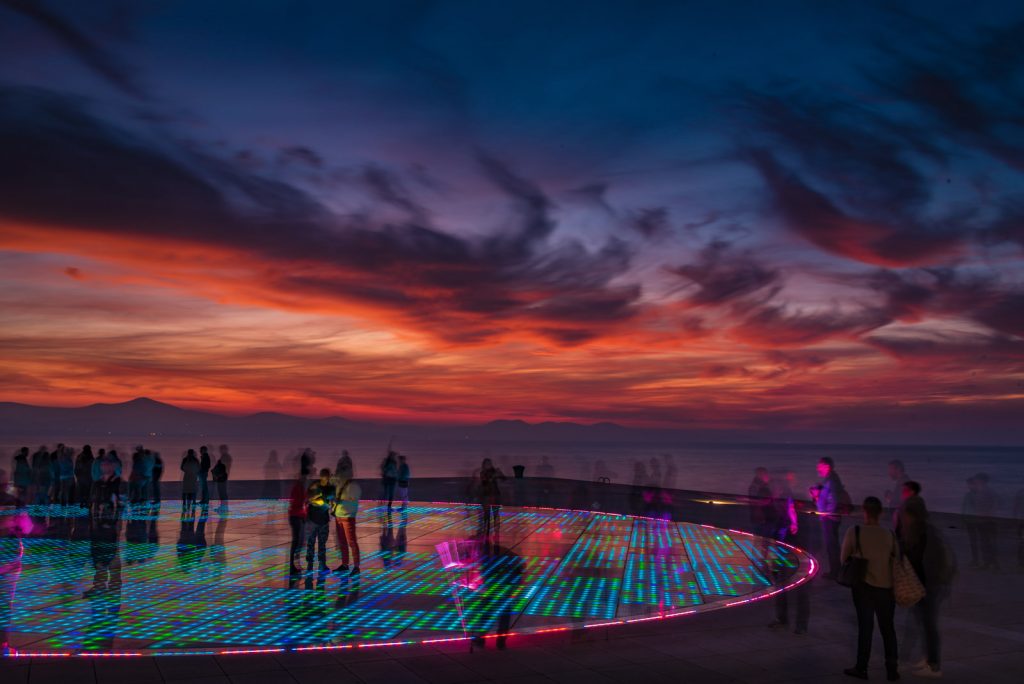 The main circle has a 22-meter diameter with photovoltaic solar modules underneath each section. Lighting elements installed inside the circle turn on as the sun sets producing an interactive light show. 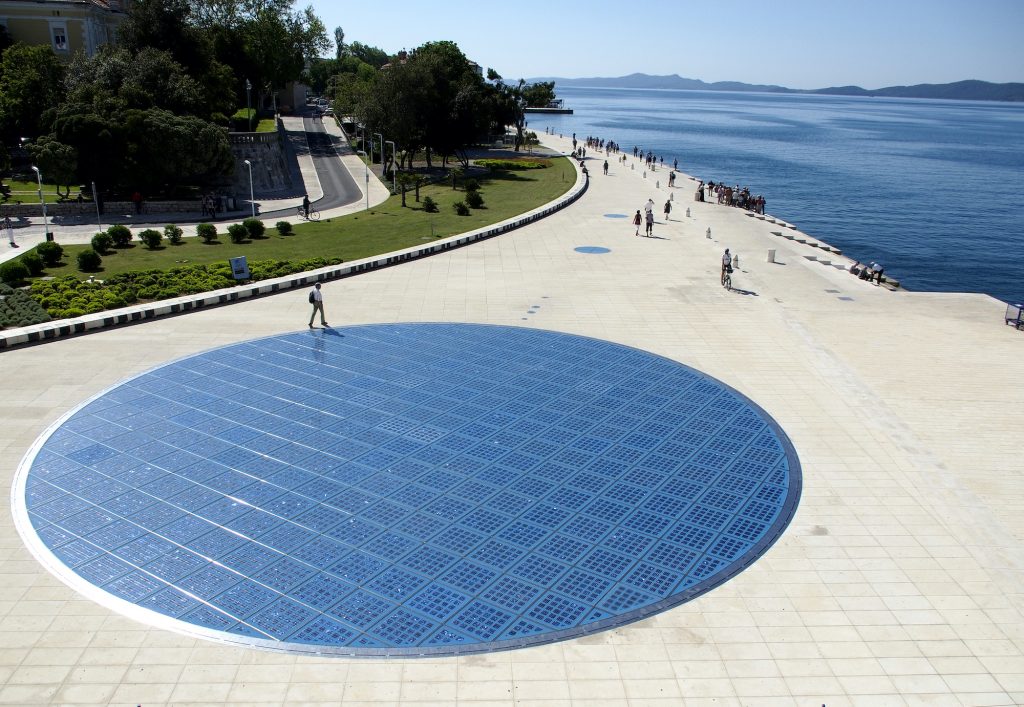 The monument was designed by Nikola Bašić, a Croatian architect, to symbolize communication between nature, light, and sound. In the photograph above, you can see a staircase close to the water. Those steps are another art installation of Nikola’s known as the “Sea Organ.” 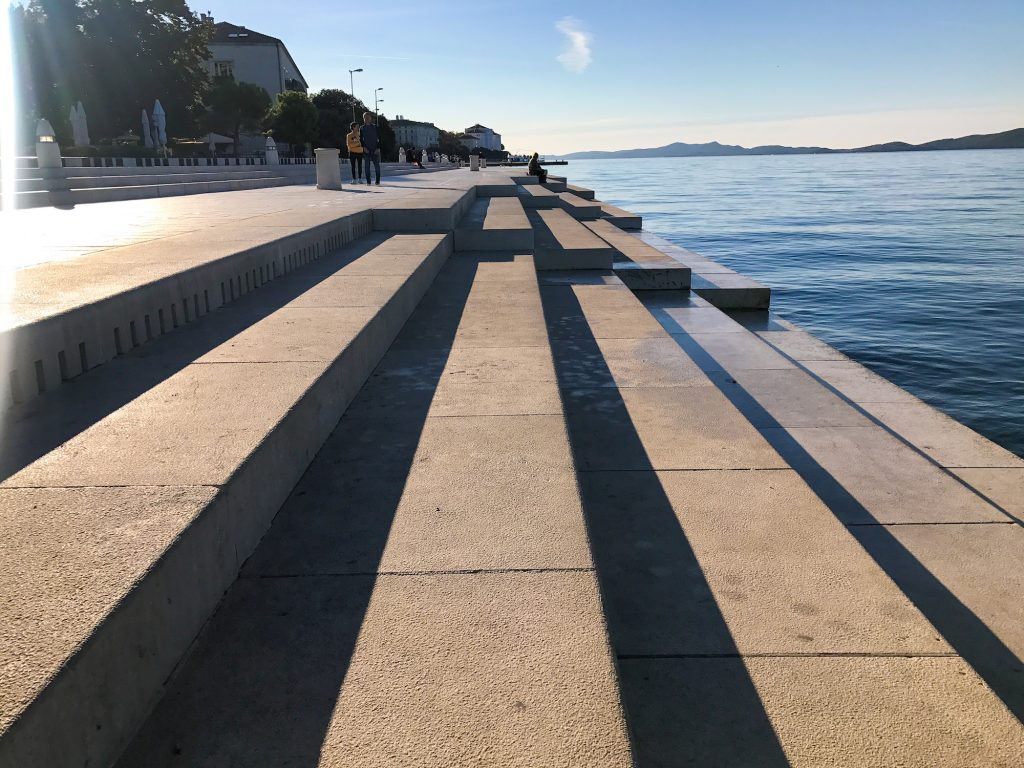 As the water crashes against the stairs, musical sounds of the sea vibrate out from the openings above and alongside the steps much like how the instrument, an organ, would sound. This creates a mystifying atmosphere when joined with the rainbow lights that shine from the Greeting to the Sun at night.

Since the sea is always moving, these sounds can be heard coming from the Sea Organ 24/7. 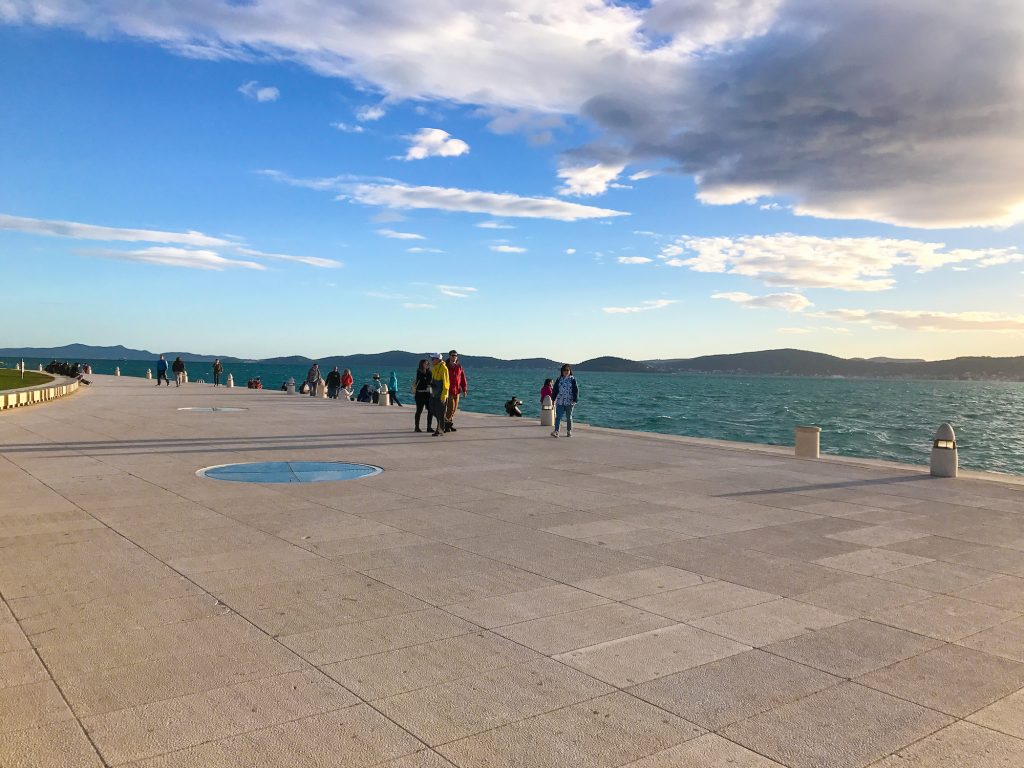 There are similar smaller installations representing the other planets of the solar system as you walk alongside the Sea Organ. The size of the Sun to each of the solar panel planets is proportional. The distance from the center of each circle is also a proportional ratio to the actual distance of each planet from the Sun. 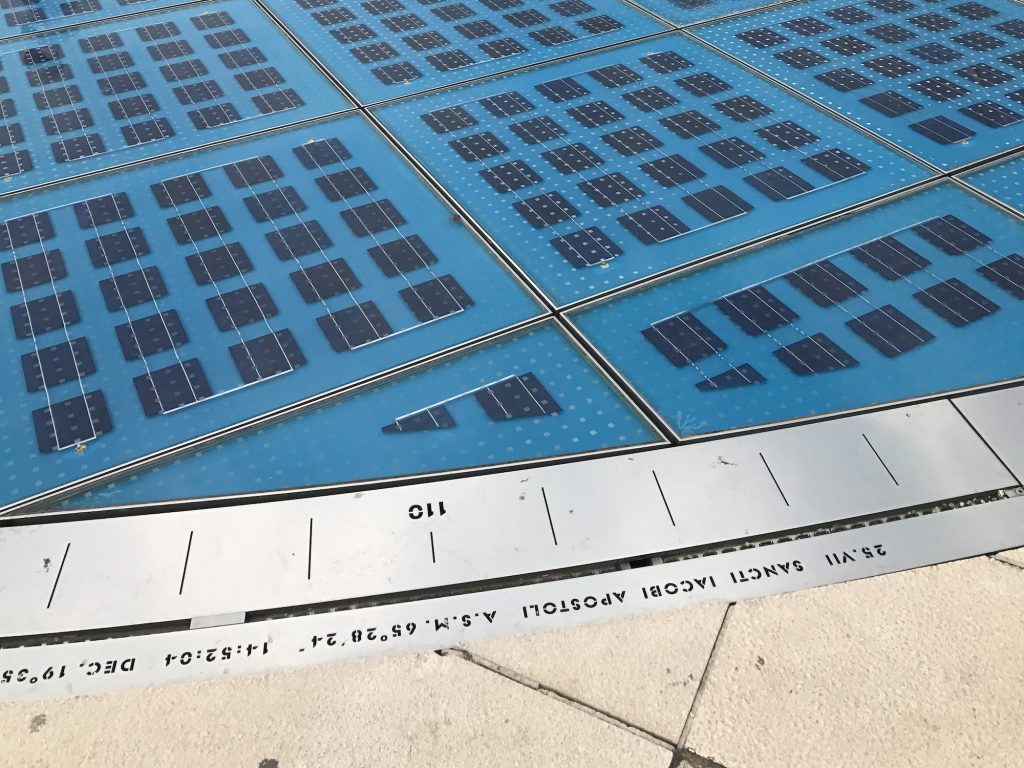 On the outer chrome ring, there are inscriptions of all the saints that the churches on the Zadar peninsula have been named after. Following each saints’ name is their date of celebration, the declination and altitude of the Sun north or south of the equator, and the length of the sunlight in the meridian on that day as well as in that spot in Zadar, which makes the Sun Salutation serve as a kind of calendar.

Annually, this system produces about 46,500 kWh of energy. This is about half of the energy needed to light the Zadar waterfront each year. 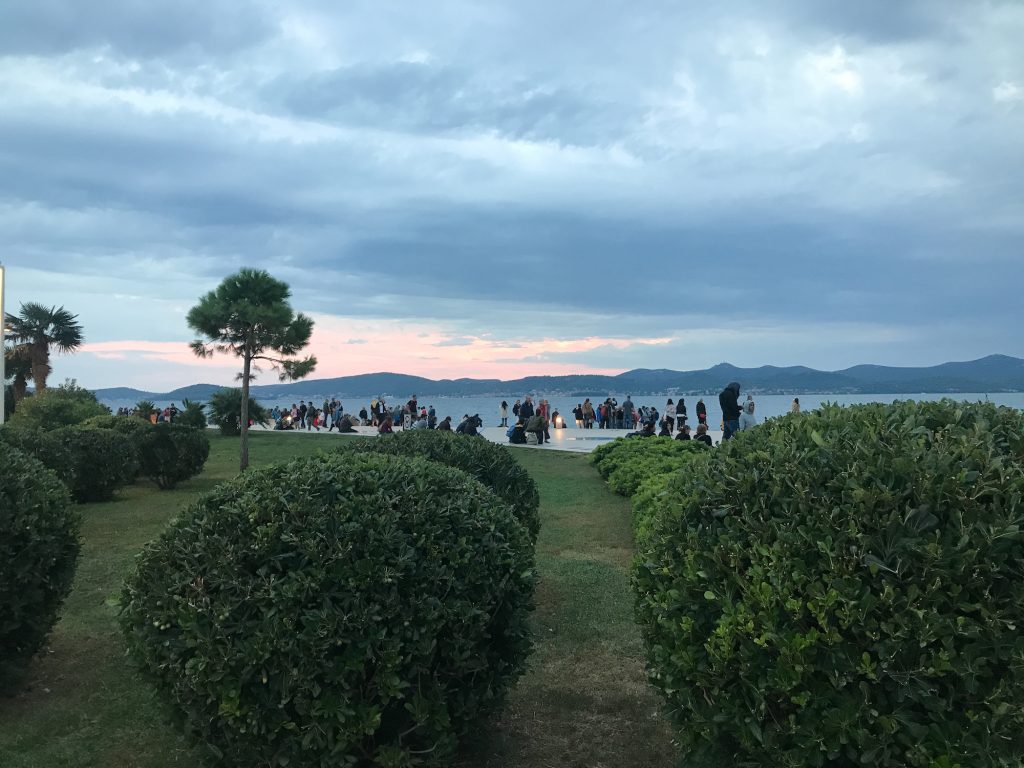 Maintenance costs due to sunlight, moisture, and salt exposure between the years of 2008 and 2018 came out to approximately 1.4 million kunas (roughly 225,000 USD) total.

As you will soon hear more about… a very extensive renovation and upgrade to the Greeting to the Sun began in 2018 and was not completed in the spring of 2019. The total cost of this upgrade was 4 million kunas (roughly 650,000 USD).

My Greeting to the Moon

On my first day in Zadar, I walked all around the peninsula with my paper map trying to understand where everything was located in relation to where I was staying. I did a dry run of the walk from my home to the western edge of the peninsula where the Greeting to the Sun is.

Of course, along the way, I had to make a quick stop at a supermarket to pick up some grains (they didn’t have any birdseed) for any birds I may encounter throughout my time in Zadar. 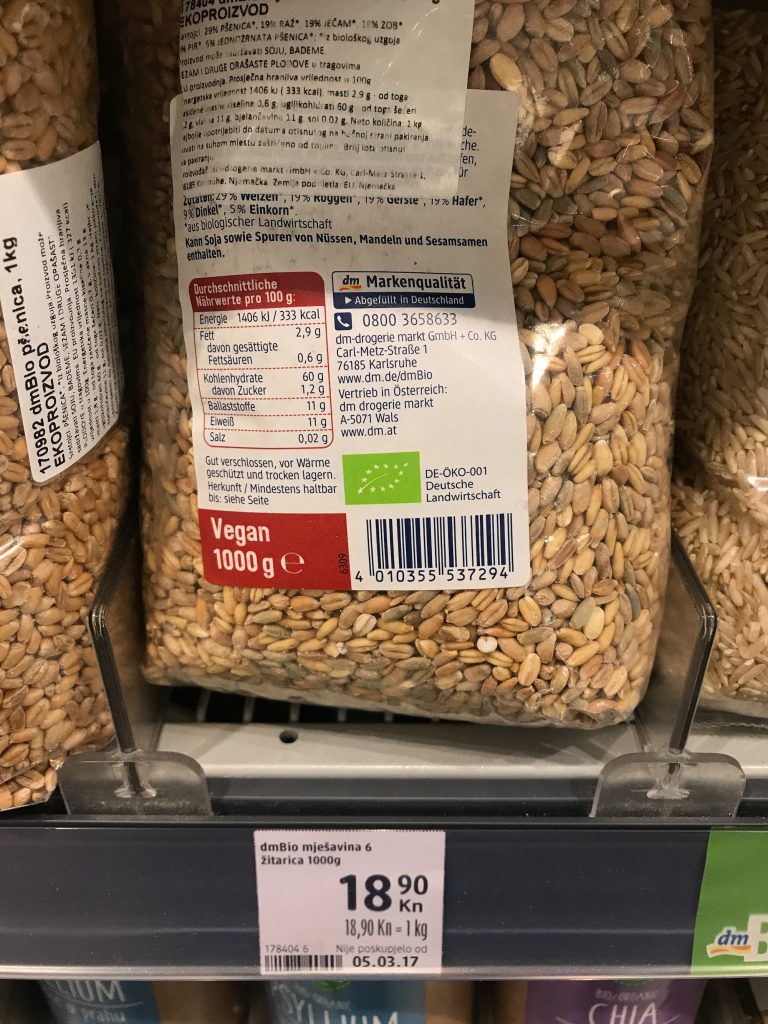 I found this interesting mix of grains in there, paid for it at the register, and then trekked onward.

I quickly realized how small this city was when only a few minutes later, I made it all the way to the far edge of Zadar. Right in front of me was the giant Greeting to the Sun. 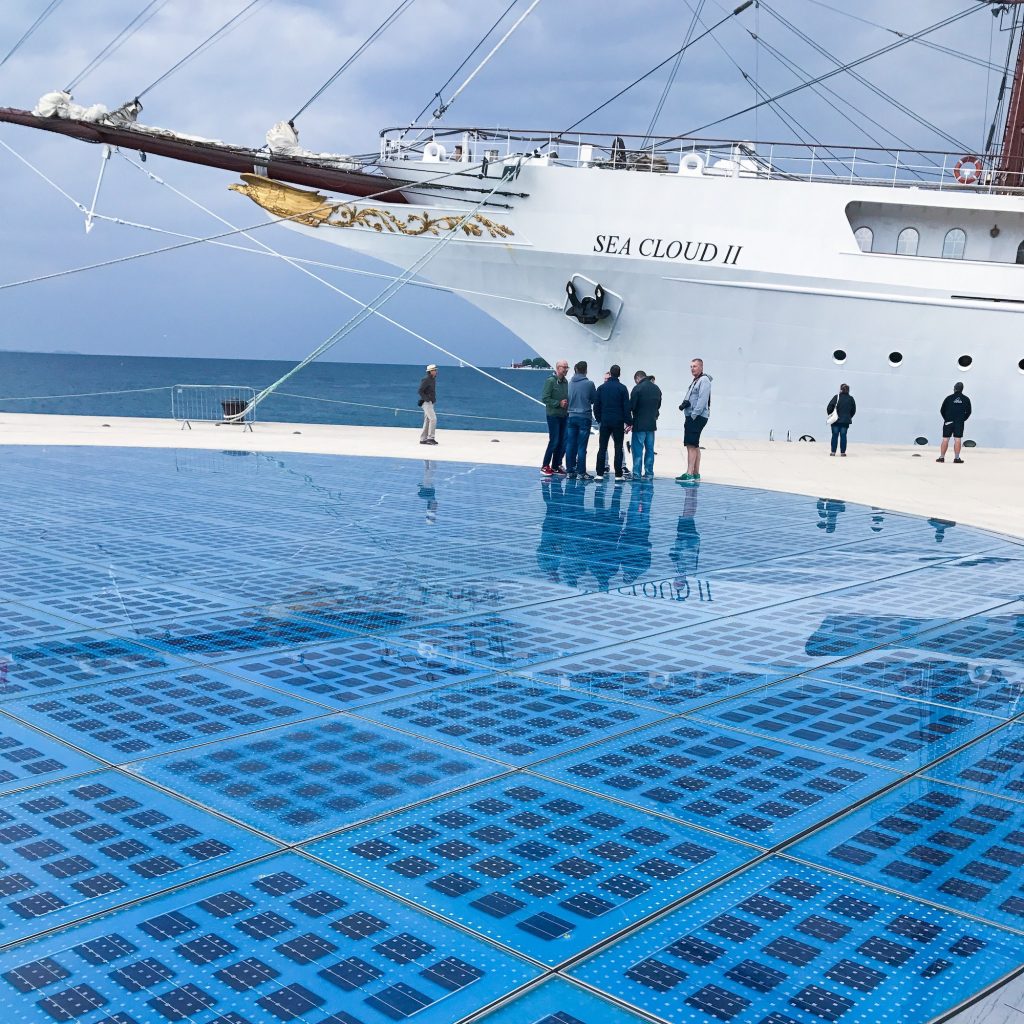 I already had eaten dinner so I chose to sit down and wait out the rest of the evening. I wanted to be there in-person for the exact moment when the Sun had set just enough that the solar-powered rainbow of lights would kick on.

I actually remember I had settled down with a book so that the Sun Salutation was just above my line of vision at the top of the page. I wanted to make sure I’d notice it right away whenever the switch flipped on. 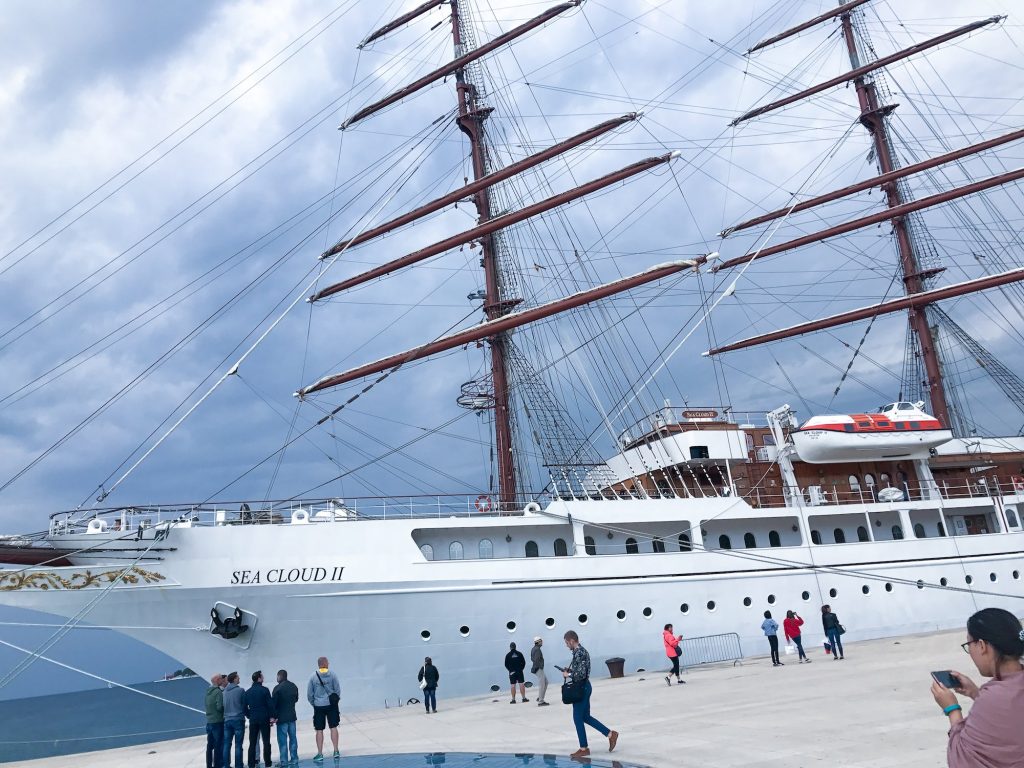 During the wait, a ship had docked beside me and tourists surrounded the area to watch performers dressed in traditional Croatian clothing perform traditional dances.

Waiting for the Sun to Set

I waited…. and I waited…

Pretty soon, the Sun had fully set…. and still, nothing had happened.

“What is going on here?” I asked myself as I stood above an even darker Greeting to the Sun met with no help from the darkening sky above. I opened my TripAdvisor app with the little data I had remaining from Poland to check the recent reviews for any explanation. As recently as the night before, people had commented about how wonderful of a sight this thing had been.

As time passed, I began to grow a bit concerned. It was during that time of confusion that I connected with a great couple from Australia. Claro and Liway were passing through Zadar and like me, had come to see the magical lights of the Sun Salutation.

To this day, this is the only photographic proof I have that I stood on Zadar’s Greeting to the Sun. 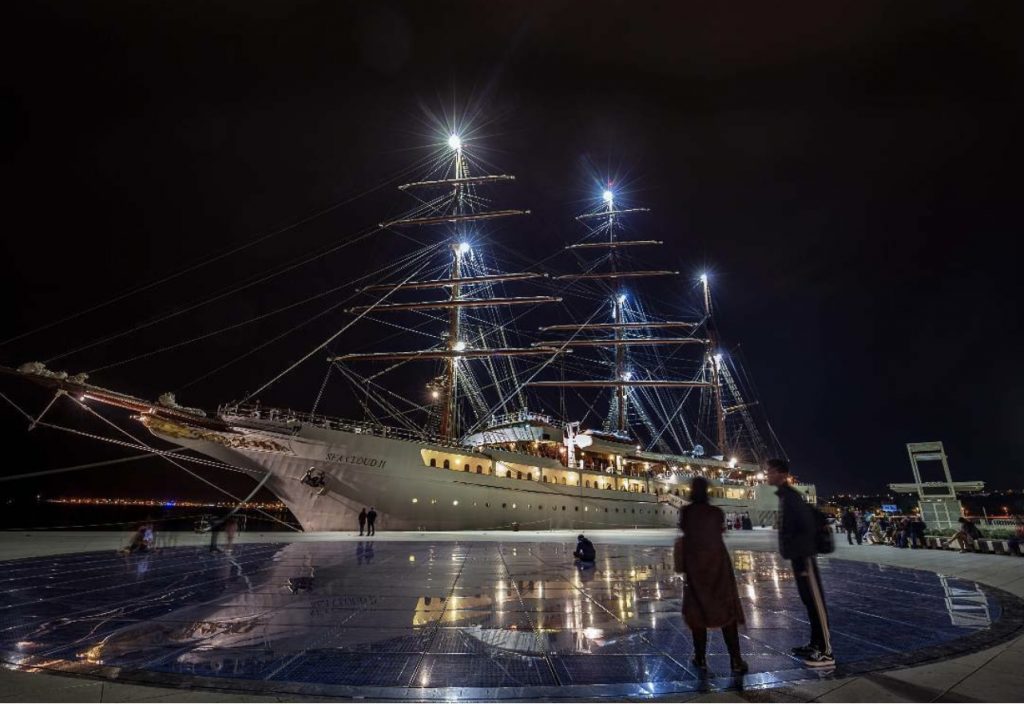 I am grateful that Claro, who is a talented photographer, took this long-exposure photograph of us while Liway and I were discussing so many different things. We had one of the most memorable conversations that night. Liway had told me about their travels and plans as well as about their life back among the cockatoos, kangaroos, and joeys in Australia.

They were so kind and I could immediately tell I had connected with two very great people. 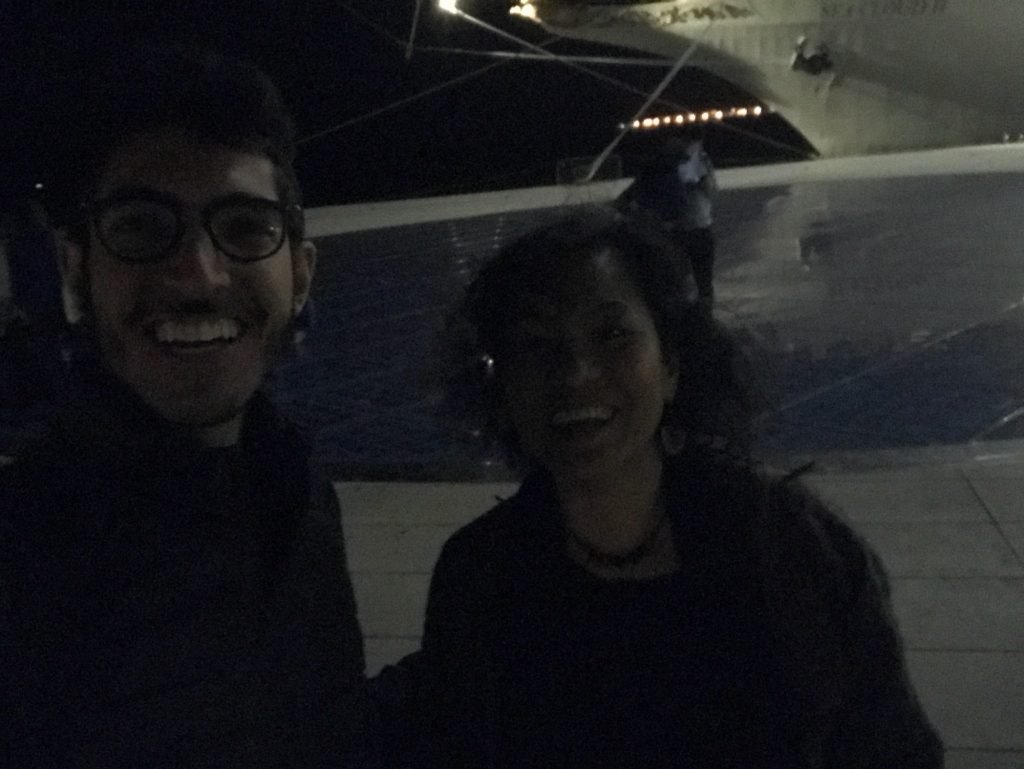 That night, The Greeting to the Sun never turned on.

Without much to see, we were left standing there to appreciate the night sky and the large moon overhead. When I heard the monument was called the Sun Salutation, I never considered that a salutation can mean “good-bye” just as much as it can mean “hello.”

In this instance, salutations were given to say good-bye to the Sun.

It was a Greeting to the Moon instead.

The Days that Followed

Because I am persistent, I came back the next day to try again.

On that day in Zadar, I learned I had arrived in Croatia just in time for the Monument to the Sun to get shut down. I came to Zadar the same day they had fully disabled the attraction. Great. 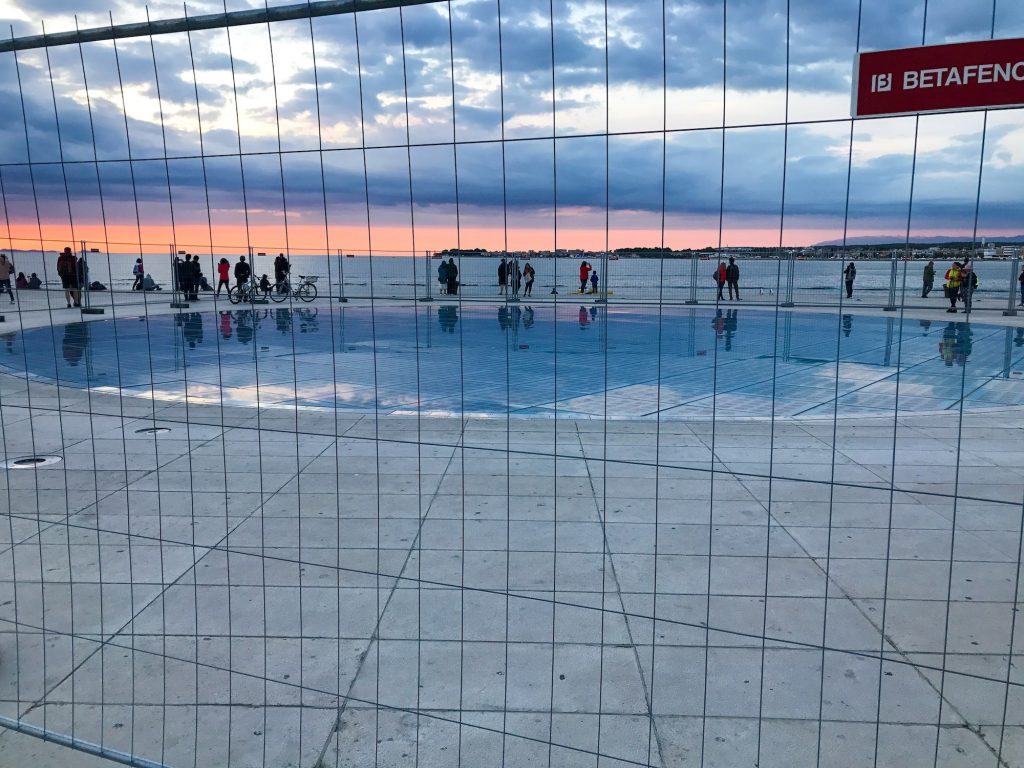 From that day on, I decided I’d make a point of revisiting the Greeting to the Sun every single night for the remainder of my time in Zadar. Without any idea of when they might reopen it, I wanted to keep trying.

I couldn’t find any definitive information anywhere explaining why it had suddenly been shut down. 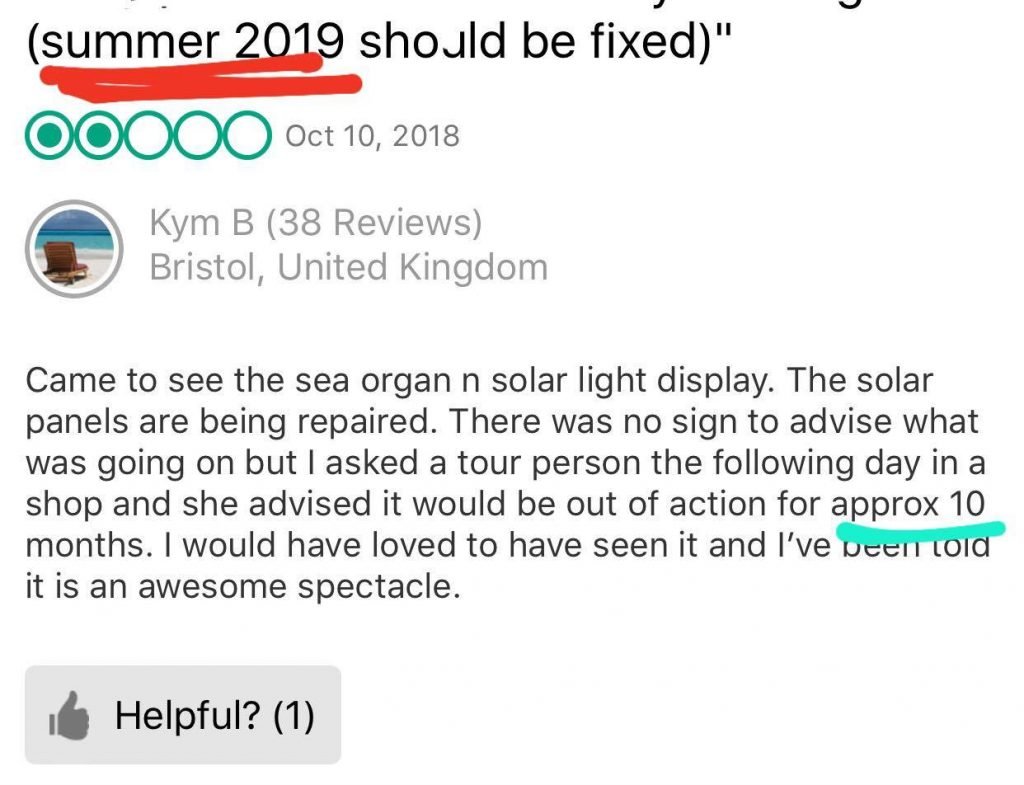 Various posts began to appear on TripAdvisor as the days went on. One reviewer mentioned that it could be out of commission for TEN MONTHS and I was praying for that not to be true.

As the nights passed and the fence remained up and in place, I began to understand that this wasn’t just a fast, temporary closure. This was a big repair. Something had happened and it needed to be fixed.

I suppose I was fortunate to have been able to see it as up close as I had even though it was turned off. 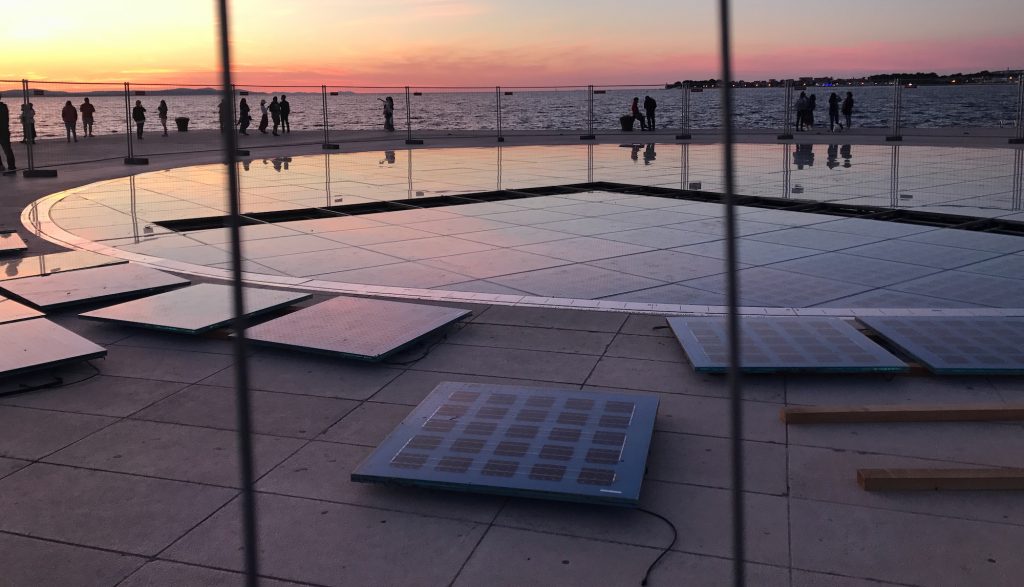 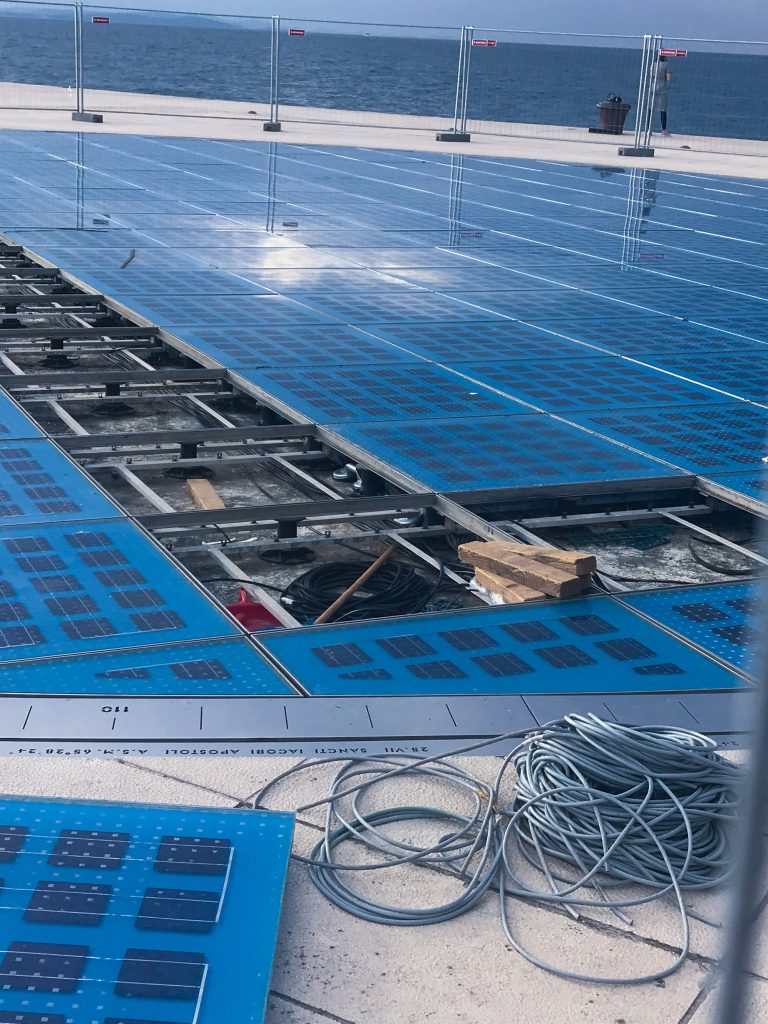 Through reading more about it, I learned that vandalism has occurred on several occasions. It mostly happens on the Sun itself, although Jupiter and Saturn have been damaged too, during times where 12 or more solar modules have been damaged.

In one instance, a 7,700-pound pickup truck drove over the modules cracking several of them.

Since then, the city has added 24-hour surveillance cameras and supervisors. In 2019 (after my visit), some young man smashed modules with a hammer causing 100,000 USD worth of damage.

Greeting None; Salutations to the Sun

I don’t exactly know what took place the night before I arrived in Zadar, but whatever the exact cause may have been, the bottom line is that I never got to see the rainbow lights during my visit.

I do wish I had gotten the chance to see the lights.

When you consider that this was supposed to be Zadar’s “main attraction” and I spent a whole month living there without ever once seeing them, yeah, that was definitely a letdown.

The more I thought about it, I started to wonder if it was maybe a blessing in disguise. Who knows. Maybe I’m just trying to find the silver lining in it all, but instead of worrying about capturing the “perfect photo” or trying to snap some really awesome Instagram-worthy selfie there, I was ultimately faced with the reality that it just wouldn’t be turning on.

Instead, I could direct my attention in the evening sky to the real sunsets and Zadar’s sure were nice. 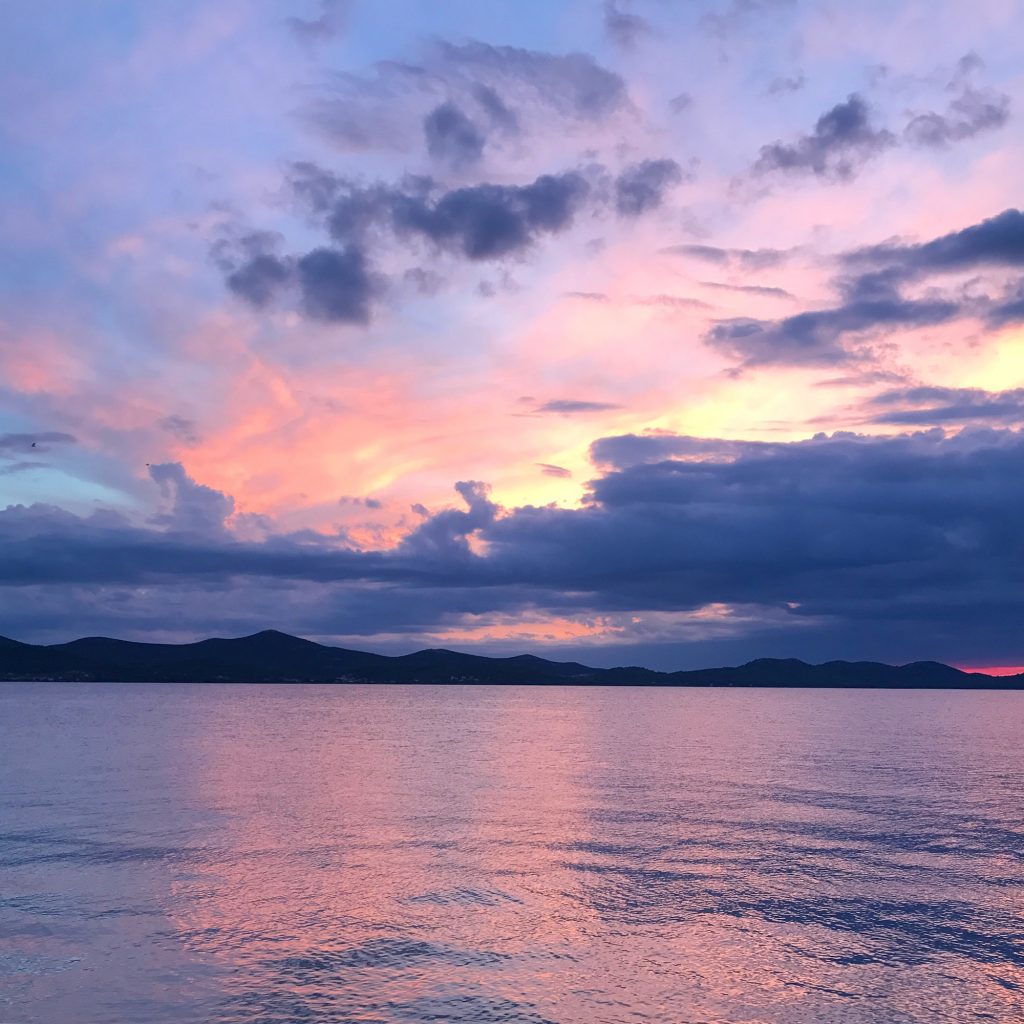 Have you ever seen such a stunning sky?

My friend Katie, a Fulbright scholar who I met while I was living in Zadar, told me that the Greeting to the Sun reopened around May in 2019.

Maybe this can go down as one of the many reasons I need to revisit Zadar again someday.