From the family of flightless, feathered birds lives the cassowary: a special bird closely related to both the emu and the ostrich. The cassowary is basically a living, breathing modern-day dinosaur. One might infer the species’ prehistoric background from its dinosaur-esque features.

The cassowary is covered in dense, two-quilled, black feathers that look very much like hair. This bird was not designed to fly, however. The feathers are hydrophobic and protect the lovely cassowary from rain and sharp thorns found in its natural rainforest habitat. The wings on the cassowary are very tiny. Their bodies may be solid black in color but they are most famously recognized for the vivid, bright blue pigmentation on the heads of both males and females.

All three cassowary species have a helmet, also called a casque, that develops on their head once they turn one or two years old. The casque is covered in a layer of keratin: the same material fingernails are made of.

The evolutionary purpose of the casque is not well understood. Scientists think it could be used to indicate the bird’s age or dominance. Others say it might be used as a protective helmet while running and pushing through the rain forest underbrush. No one really knows for sure. 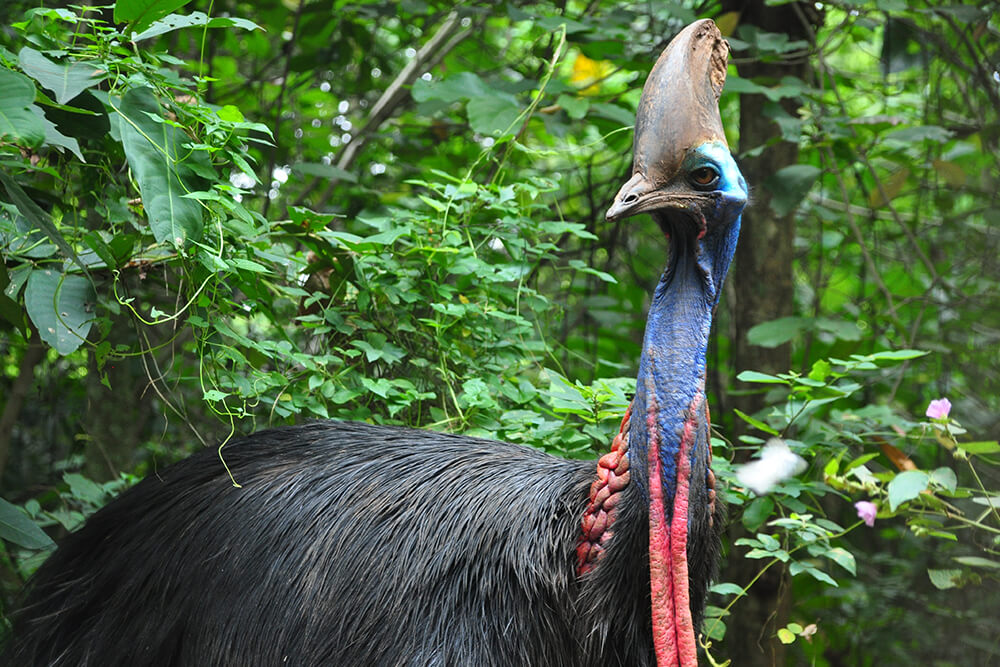 The cassowary can kick. Its velociraptor-like legs are strikingly powerful. In fact, the cassowary is considered the most dangerous bird in the world! With one swift kick, the cassowary can easily slice open any predator or potential threat. Using its strong legs, it can run up to 31 miles per hour and jump up to 5 feet high.

Cassowaries are incredibly difficult to observe. They are quick to retreat into the rain forest so little known about their natural behaviors. They are crepuscular creatures meaning they are most active at dawn and dusk.

Where can a cassowary be found? It is estimated that of the three known subspecies, only 1500 birds remain. All of them can be found in Papua New Guinea, Northern Australia, and surrounding islands. They live in the dwindling tropical rain forests. Due to rapid climate change, the poor cassowary faces an uncertain future.

To learn more about the cassowary, here are a few interesting videos you can watch:

I hope I can someday encounter and observe the glorious cassowary in Papua New Guinea.